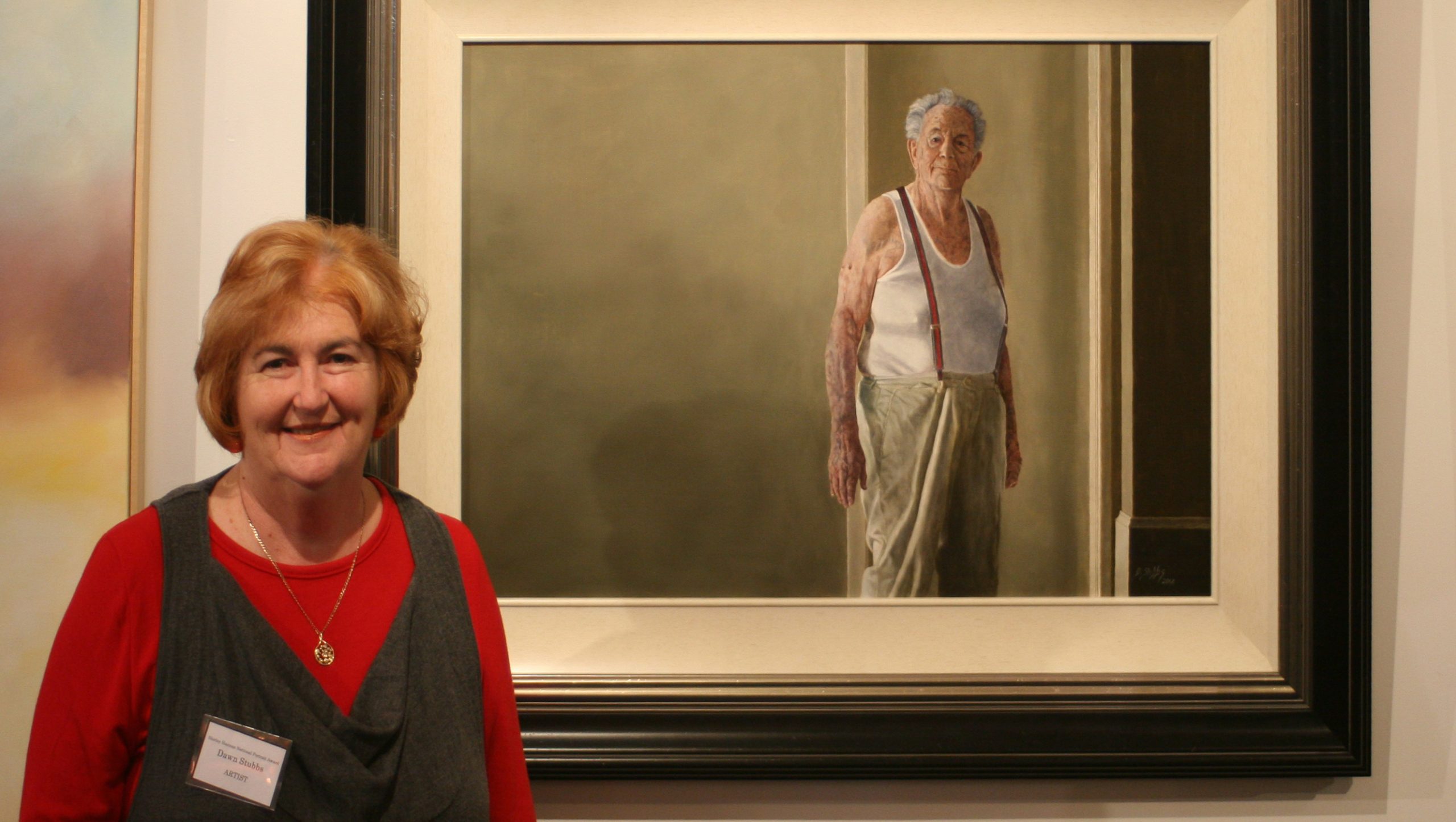 BETTER known for her wildlife art, Munro artist Dawn Stubbs has won a prestigious $40,000 art prize with a portrait.

Although she only began portraiture three years ago, she outshone her competitors in this year’s Black Swan Portrait Prize, taking out the $40,000 Lester Group Prize the highest prize in the competition.

The winning portrait of her father-in-law, Max Stubbs, titled Black and Blue, is based on a photograph taken by her husband Chris, and depicts Max standing in a doorway leading to his garage.

“There was a light coming from a certain direction, it was a very blurry, awful photo, but both of us looked at it and said that it would make a really good portrait,” Dawn said.

That was two years ago.

It wasn’t until April or May this year that she got her father-in-law to sit for her a somewhat difficult task.

“I had the layout all ready, I had exactly what I wanted, and all I could really do was take half a dozen or so photos of him because he’s not very well and he’s got a walking stick,” she said.

“We had to sit him down all the time, and then get him to stand back up again so we could get the photos.”

When returned she realised she had enough time to enter the portrait into the Black Swan Award.

Next year Dawn hopes to enter the prestigious Archibald Prize with a self-portrait.

She said a revealing self-portrait might help her come to terms with losing her father, who died in December last year.

“I never really got the right photos to do a portrait of him,” she said.

” I took hundreds of photos and did a lot of sketches, but don’t feel I got the right ones for that.”

She also laments the loss of her teacher Charles McCubbin, two years ago, saying, despite his high hopes for her, he never got to see her achieve.

Describing herself as a late arrival, Dawn has only been entering big prizes in the past two years.

“I never really gave myself any chance,” she said.

It was a nervous flight to Perth to hear the results of the Black Swan for the country girl who admits to a fear of flying.

“Chris and I really had no intentions of going over there because it was in the heart of Perth, but they rang me.

“They didn’t tell me I’d won the biggest prize … they just said they would really like me to be there at the opening, so we jumped on a plane and off we went.”

Dawn said she was “thrilled to bits”, not only with winning but at the chance to see some of Australia’s top portraiture artists, who she described as being the rock stars of the art world.

She said the judges were interested in pieces with a personal edge, over big, grand portraits of celebrities or public figures, and believes this might have been what helped her snare the prize.

“There was a lot of sentiment in the painting,” she added.

Dawn and her husband Chris, a wildlife sculptor, operate the Australian Wildlife Art Galleries on the Princes Highway at Munro.

Two of their three children have also become artists Crystal Stubbs is a glass artist and Kelly Williams is a gold and silversmith.