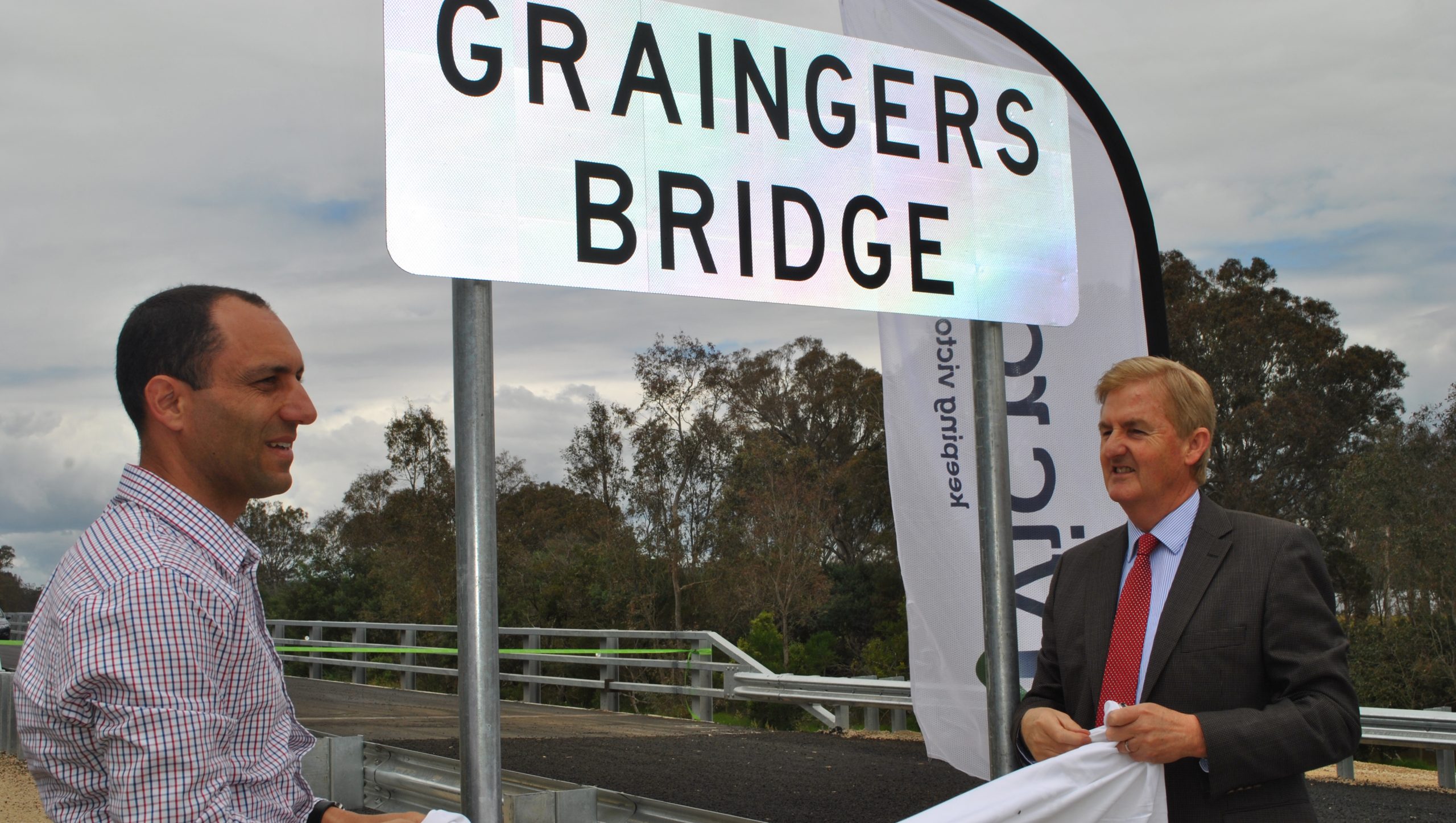 JOHN Harry Grainger, the architect and engineer who built Sale’s historic Swing Bridge, was recognised on Sunday when the second bridge built as part of stage three of the South Gippsland Highway Sale to Longford flood protection project was named in his honour.

Deputy Premier and Gippsland South MLA Peter Ryan opened Graingers Bridge on Sunday, the final section of bridge to be built as part of the $56.9 million Cox’s Bridge project with the bridge to be opened to traffic in the coming week.

“I am pleased to be part of today’s event to unveil the name of this new bridge, named in honour of John Harry Grainger, whose designs include the nearby Swing Bridge and Melbourne’s iconic Princes Bridge,” Mr Ryan said.

Mr Ryan said the new bridge was 660 metres in length and completed the Cox’s Bridge project, following the opening of the 440 metre long Cox’s Bridge a little over a month ago.

“The South Gippsland Highway between Sale and Longford has been progressively upgraded for both flood protection and safety purposes during the past 10 years,” he said.

Mr Ryan said Graingers Bridge and the adjoining sections of road would be opened to traffic over the coming week, once final barrier and fence works were completed.

“Once these final works are completed traffic will no longer use the old sections of highway so work can get started on the new shared path running alongside the highway and bridges,” he said.

“The new pathway will link up with existing paths through the adjacent wetlands and allow cyclists and walkers to travel between Sale and Longford without having to travel on the highway.”

Mr Ryan said the new section of highway was one to 1.5 metres higher than the old road height and the bridges had been designed to withstand damage during large scale flooding.

“It is expected that the new section of highway will have far less frequent and less significant closures due to flooding, avoiding the lengthy detour via Rosedale,” he said.

“This will mean locals and industry will have a much more reliable route between Sale and Longford.

“I would like to take this opportunity to thank the local community for its patience while roadworks have been underway.”

Meanwhile the Princes Highway Duplication project, Wurruk to Sale section, remains on track to be completed early next year, with traffic switching onto the new causeway structures last week.