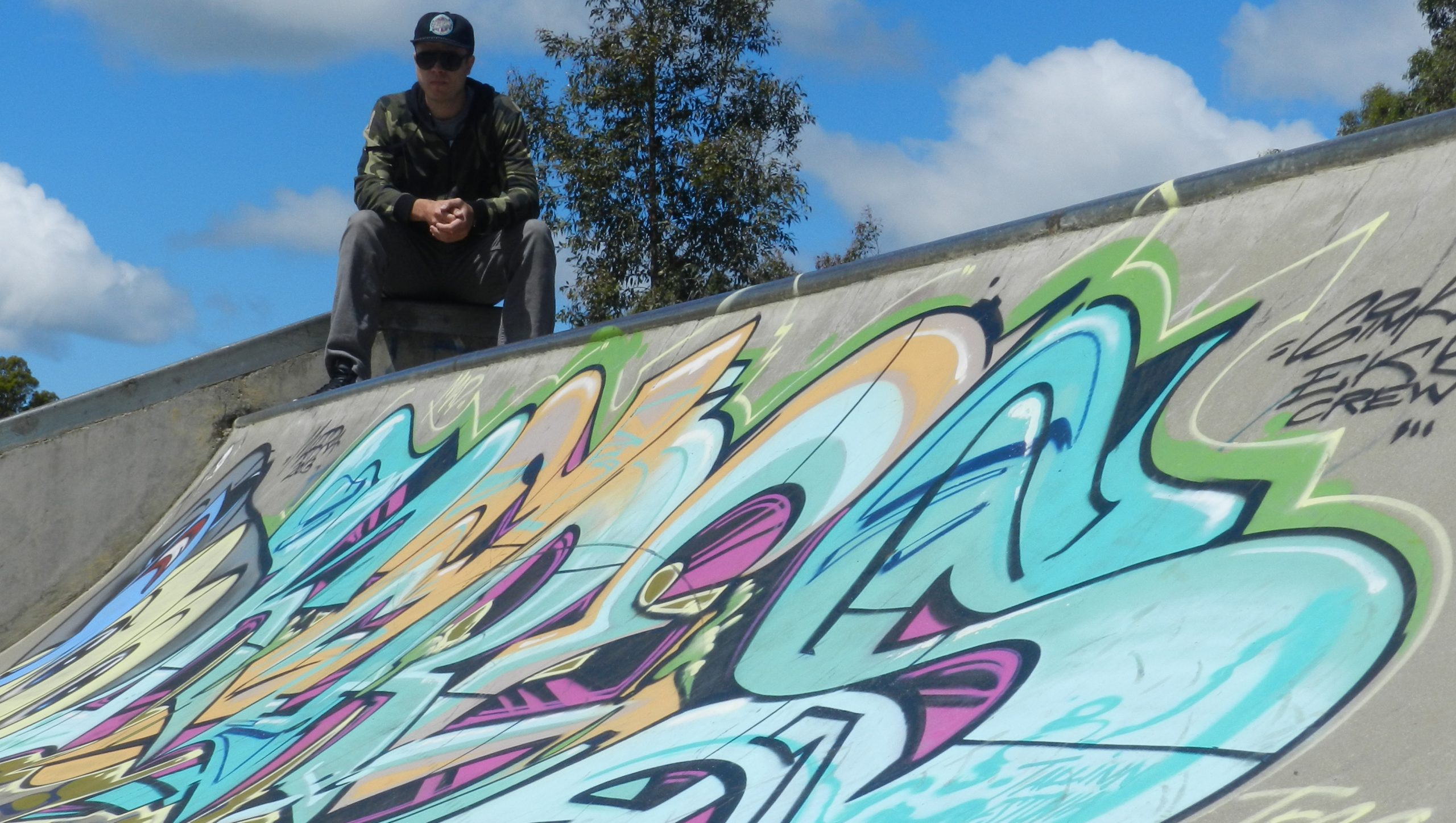 MAFFRA Skatepark has been given a face lift thanks to an Estonian graffiti artist professionally known as Sim Kares, who donated his time and paint to add a splash of colour to the formerly drab site.

The 28-year-old has been in Australia for 11 months, spending time in Western Australia and Victoria, including the towns of Maffra and Briagolong where he undertook work as a farmhand to fulfil his visa requirements.

Before he started painting, with the assistance of his girlfriend Teresa, Sim applied for, and was granted, permission from the Wellington Shire Council, which had been investigating possible solutions to problem of offensive graffiti in the area.

Sim said he sought permission from the council because he wanted to complete the work in daylight hours.

“I hadn’t really seen big graffiti pieces here so I thought it would draw too much attention if I just started to do it,” he said.

“Usually the skate parks I see are full of pieces and stuff but this was just empty, so I thought ‘why not?'” Sim said, “so I just called them and sent a sketch.”

While the lettering was freestyle Sim admitted the design of a skateboard and shark was originally created as a graphic design competition for a skateboarding company.

“I didn’t do well there but I still wanted to use the sketch, (Maffra Skatepark) was a good place for that,” Sim said, explaining that he had made changes to his original design.

“You really don’t want to make the piece look like a left over piece, although that’s what the piece actually is,” he laughed, explaining how he had paint left over from his five-month stay in Melbourne.

“I had these colours in my van,” Sim said, describing how he managed to squeeze the last of the paint out of the cans while completing the design.

Very selective about the type of paint he uses, Sim said he had difficulty finding the right paint outside of Melbourne.

“They don’t sell so nice paint in building shops, it’s watery and they only have one nozzle,” Sim said.

When painting his design at the Maffra Skatepark, Sim said local skaters approached him to see what he was doing.

“They asked me, ‘where can you buy paint like that?’ ‘In Melbourne’,” he laughed.

While in Melbourne, Sim said he, along with other artists created some not so legal pieces in Union Lane, a sort of street art hub.

“It wasn’t really permission stuff, but it was daytime stuff,” he explained, “proper pieces with locals and with other backpackers from around the world.”

“It’s an interesting place,” Sim said, he enthusiasm for the city shining through.

“You meet other writers from around the world and you talk to them and you get together next week and do something together, that’s what’s cool about it,” he explained.

Sim said the graffiti culture of Australia, and in particular Melbourne, was very different from his home in Tallinn, Estonia.

“Tallinn is like the capital of Estonian graffiti,” Sim said.

“It’s the biggest and you see a lot of stuff there.”

He said in Tallinn graffiti art was embraced with skate park graffiti competitions, adding that there was always new pieces in the area.

Sim said he could go away and come back after ten years and still see the works he’d done, while in Melbourne, pieces only seemed to last two weeks before they were covered with something new.

“I think this piece will trigger new pieces in here (in Maffra), that’s what happens usually,” he said.

“The designs add some vibrancy to a space that is very important to the youth of our shire,” he said.

“We thank Teresa and Sim for volunteering their time and resources to improve Maffra’s skate park.”

More of Sim’s designs can be viewed at www.simkares.blogspot.com or www.facebook.com/simkares