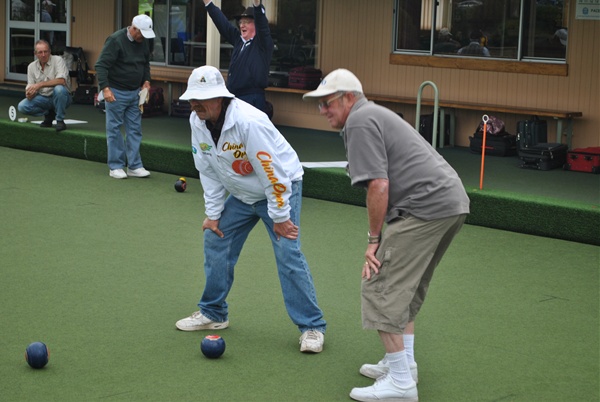 LOCAL charity group the Five Star Project benefited from the success of the Bowls Victoria North Gippsland Goodwill Tour last week, with tour members handing over a cheque for $700 at the tour’s final destination of Yarram on Friday.

The week long competition included tours of Heyfield, Rosedale, Yarram, Loch Sport, Stratford and Port Albert, with the team of 29 visiting the project during their tour of Sale, visiting the residents and the community room to see their donation at work.

The touring party consisted of bowlers from the Ballarat, Bendigo, Central, Central Highlands and Western Districts bowls divisions along with members from the Northern Gateway bowls region.

The Five Star Project was developed to provide independent living for young adults with disabilities.

Since the completion of the units, the residents’ confidence has visibly improved with many of them now working in a variety of jobs.

Five Star Project chairman Leo O’Brien said without the Five Star Project, many of these people would have ended up in a nursing home once their parents were unable to care for them.

“It’s great to see our project embraced by so many different organisations within the community,” he said.

“With plans underway for the next stage of the project, the continual support received is vital to the ongoing success of Five Star and the continued provision of quality accommodation options for these amazing people.”

Bowls Victoria board member and tour leader Murray Rowe said funds would be raised through issuing fines to both touring party and local club members. Fines were issued for bad behaviour, swearing, bad ties and everything in between.

“Anyone who performs any misdemeanours, for example bowling on the wrong bias, will be fined,” Mr Rowe said.

“Not only the touring party, but local bowlers as well.

“At the end of the week we will make a presentation of the money raised and we hope everyone gets into the spirit.”

Mr Rowe said the North Gippsland tour was one of four being conducted in the state this year.

“There is also one in Sunraysia, one in the Wimmera and one in the far east,” he said.

“It is a self funded trip, all people pay their own way and we are trying to get around the state in six years.

“We come with good will and it is good to hear local clubs concerns to take back to Bowls Victoria.”

Central Wendouree Bowls Club member and tour manager Ian Bishop said bowlers could be assured the money would be going to local charity.