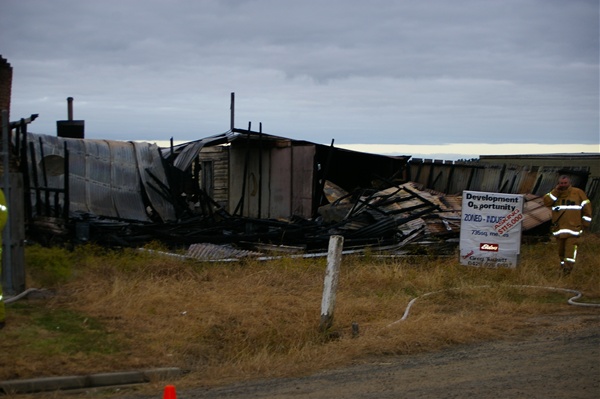 A LOCAL man has been placed into an induced coma after he received burns to more than 50 per cent of his body after his house exploded in Yarram early this morning.

According to witnesses, an explosion was heard across the town shortly after midnight.

CFA received a call-out to the Rogers St residence about six minutes past midnight, and according to CFA District 10 operations manager Allan Rankin, the house was fully ablaze when firefighter crews arrived minutes later.

“The weatherboard house was fully engulfed by the time crews arrived on the scene,” Mr Rankin said.

The 35-year-old occupant of the house received burns to up to 50 per cent of his body, with severe burns on his face, upper body and legs.

Ambulance crews stabilised him on the scene and he was flown via Helimed-1 to the Alfred Hospital, where he was placed in an induced coma later.

As of 10am this morning, his condition was still listed as critical.

The blaze was brought under control by firefighters within an hour, and CFA crews from Yarram, Port Albert and Devon North remained on the scene until daylight, ensuring the fire was fully extinguished.

The house was almost completely destroyed by the fire.

CFA fire investigators and Victoria Police arson detectives are looking into the cause of the fire.

Neither police or CFA were yet able to indicate what may have caused the explosion.