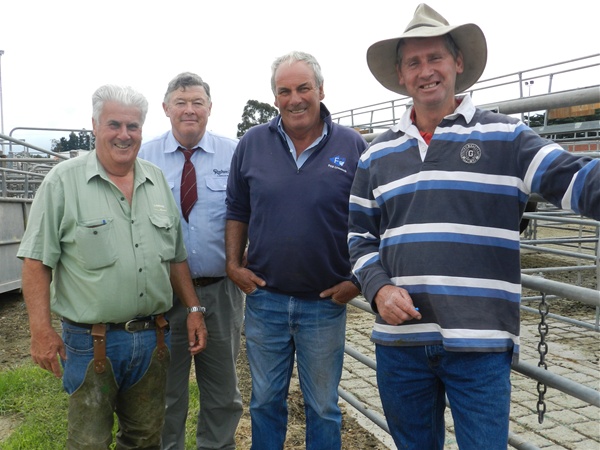 IT’s time more than a decade of dithering over the future of the Sale Livestock Exchange ended.

Agents say uncertainty over the exchange’s future should stop, and are calling for money to be allocated now to provide more suitable modern facilities — either on the existing site in Sale or on land at Fulham.

Highlighting the importance of keeping the sale yards in the Sale area, Landmark agent Rodney Perkins said at least 120 people were employed around the facility.

“It’s not a small industry to be sneezed at.

“If we lose the sale yards, we lose a big industry from the district.

“We want some answers.

“Either revamp this one or build a new one at Fulham.”

Wellington Shire Council is currently completing a feasibility study on the future of the exchange, considering either enhancing the existing facility or building a new one at Fulham.

The study was due to be completed in December, but any finding has been pushed back to this month at the earliest.

Council secured land for a new sale yards on Hopkins Lane, opposite the Fulham Correctional Centre, in 2005.

Issues, largely centred on funding and whether the Victorian Livestock Exchange will continue to manage the facility, have delayed the issue progressing.

The exchange now has new management, with managing director Graeme Osborne retiring from the position at the start of the year and an in-confidence agreement settled with council in closed session.

Adding to confusion over the future of the sale yards, the exchange previously indicated a preference for Rosedale as the new site.

Upgrades at the sale yards are needed to keep up with occupational health and safety standards and animal welfare, with yards at Bairnsdale, Pakenham and Koonwarra, which have taken business from Sale, benefiting from having soft flooring.

“If we get that commitment we can get those cattle back here,” Mr Perkins said.

The Bairnsdale yards are owned and operated by East Gippsland Shire Council, while Pakenham and Koonwarra are owned by the Victorian Livestock Exchange.

The council study will include options for the preferred model of ownership and management for the Sale yards.

Graeme MacGillivray from Rodwells said a commitment from council would encourage business to return and confidence in the local industry.

“We want a fresh start; a new outlook,” he said.

With a commitment about the future of the facility from council, Ian Baker from FOB Livestock said current clientele would remain in Sale.

“We want a commitment,” he said.

“Our clientele are getting really toey.”

Council will be briefed on the feasibility study, which will include a number of recommendations around the current site and its operation, in the coming months.

Once council has been briefed, it will consider developing a public discussion paper which will be used to canvas community opinion on the issue of a Sale Livestock Exchange.