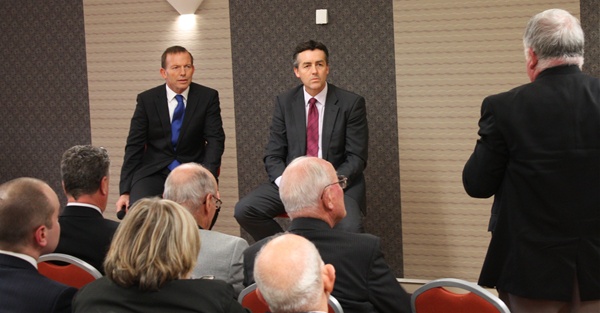 A LARGE number of Gippslanders are expected to attend tonight’s community forum in Sale where Federal Opposition Leader Tony Abbott will be quizzed by the community.

Mr Abbott will arrive in Sale buoyed by the Campbell Newman-led Liberal National Party victory in Queensland at the weekend.

The LNP smashed nearly 14 years of Labor rule with a devastating 16 per cent swing, delivering Queensland Labor its worst ever defeat.

Mr Abbott is in the region as part of his annual “Pollie Pedal” bike ride for charity and is being accompanied on the Gippsland leg by Gippsland MHR Darren Chester.

The group will be in the region for three days with overnight stays in Sale, Lakes Entrance and Orbost.

Mr Chester has co-ordinated the community forum to give local residents an opportunity to raise issues of concern with Mr Abbott.

“Last year Tony came to the region and hosted a community forum in Morwell to hear the concerns of Gippslanders,” Mr Chester said.

“There was a wide range of issues then and I expect that we will see a similar pattern (tonight) with many Gippslanders raising concerns with me, particularly about the impact of the carbon tax on our region.

“It will be a good opportunity to have Tony in the region again to speak to local communities and also visit local businesses and natural attractions.”

Since the first ride 10 years ago, Mr Abbott and his Pollie Pedal supporters have raised more than $2 million for charity.

Carers Australia is the charity benefiting from funds raised by this year’s event.

“I’m looking forward to helping Tony raise funds for Carers Australia which is a very worthy cause,” Mr Chester said.

After leaving Sale, Mr Abbott will continue riding through to Canberra during the following five days.

People must have registered to attend the forum.

Phone Mr Chester’s office in Traralgon on 5174 1341 or email jenny.graham@aph.gov.au