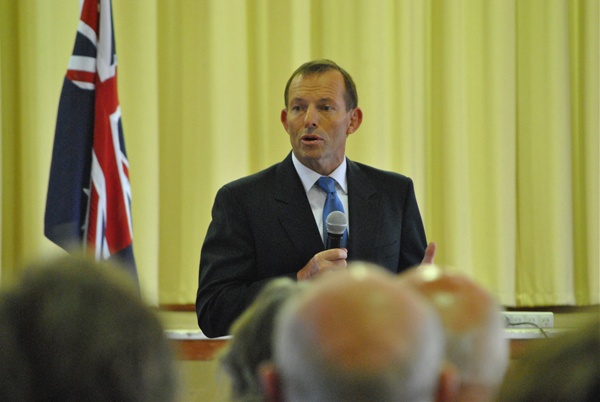 FEDERAL Opposition Leader Tony Abbott used a community forum in Sale to affirm his commitment to repealing the carbon tax should the Liberal-National Coalition win the next election.

About 300 people attended the forum at the Sale Memorial Hall, where Mr Abbott was also asked about interest rates, gay marriage and over-governing, among other issues.

Mr Abbott was most comfortable when answering questions directly related to Coalition policy, but shied away from a question about leading ideas and debate around social issues such as protecting children and the breakdown of marriage.

With a promise to repeal the Labor government’s carbon tax set to be a major part of the Opposition’s election platform, Mr Abbott was confident of success next year if the election became a virtual referendum on the carbon tax.

“No party wants to commit (political) suicide twice,” he said.

“It’s a myth that once the carbon tax is in, it’s forever.”

Under a Coalition government, Mr Abbott said, the carbon tax would be “deader than Julius Caesar”.

“This is a great country burdened by bad government.

“There will be an outpouring of optimism with a change of government,” he said.

Mr Abbott said Gippsland had great potential, but that was in danger because of the carbon tax, due to its impact on a power industry reliant on brown coal.

Mr Abbott said a better way to reduce emissions was to provide incentives to business.

Instead of spending billions of dollars on the National Broadband Network, Mr Abbott said there needed to be spending on infrastructure, such as transport.

“With only a few trains between Melbourne and Sale, the last thing on your mind is spending $50 billion plus this government is spending on national broadband,” he said.

While saying foreign investment was important, Mr Abbott said foreign ownership of land needed to be judged against the national interest.