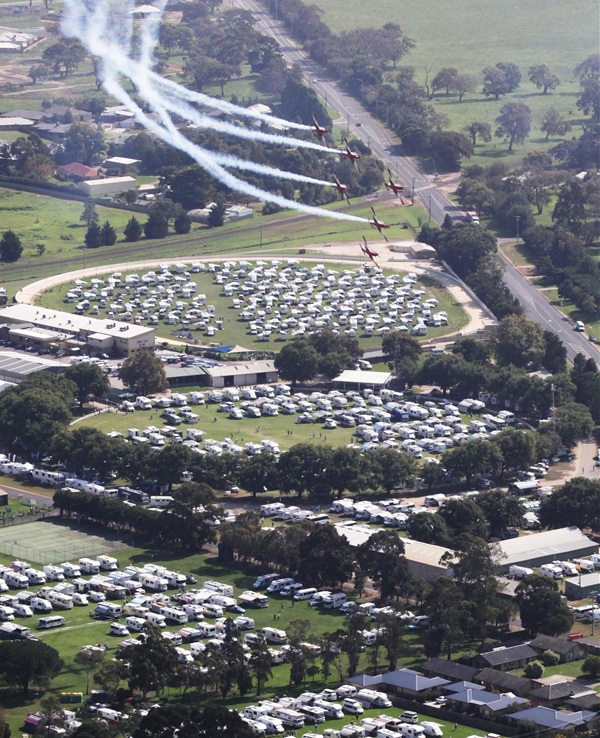 In a spectacular prelude to the opening the RAAF Roulettes performed a series of formation aerobatic manoeuvres above the showgrounds to welcome the more than 1600 visitors to Sale.

The rally has attracted more than 800 motorhomes to the Sale Agricultural Society’s showgrounds, which along with the Sale Greyhounds and Gippsland Grammar facilities, have been thrown open to attendees.

Mr Ryan said the rally would bring financial benefit to Sale, describing it as a million dollar Easter present.

“Judging by the number of campervans and motorhomes that have descended on Sale over the past week, the adage seems to be true,” he said.

“In the lead up to this event we have made significant investment into new infrastructure at our rest stops, Visitor Information Centre and the Port of Sale in an effort to meet the CMCA’s high standards in achieving RV Friendly status.”

“We have had lots of positive comments,” he said.

Friday night’s wind storm caused damage to some motorhome annexes and a giant rally marquee had to be closed for a safety check.

“It is all operating as normal now and fully functional for the evening’s entertainment,” Mr Gard said.

Yesterday the rally held its open day, with the public invited to explore the trade displays and look over the assembled motorhomes.

“ People are starting to stream in now,” Mr Gard said.

“It appears some of the stall holders who were to attend have been deterred by the weather, but it is Sale, if you don’t like it wait and hour and it will be fine,” he said.