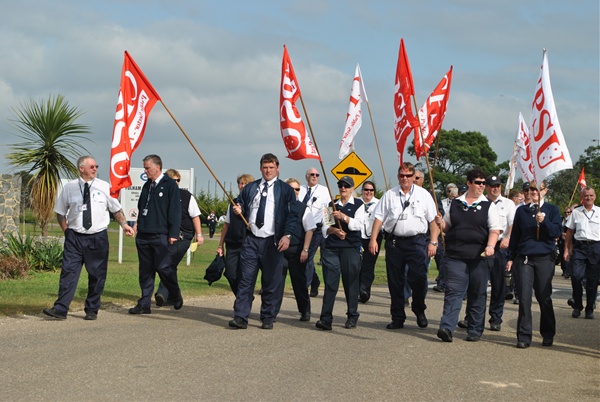 PRISONERS have been released from their cells following a return to work by prison officers at Fulham Correctional Centre this morning.

The prisoners were locked in their cells yesterday following an escalation of work bans by prison offers currently requesting an effective 58 per cent increase and reduction in hours.

Negotiations between management of the Fulham Correctional Centre and the union will continue.

Prison officers flown in to assist in maintaining the secure and safe management of the centre will remain on site.

The facility was under lockdown as correctional officers stopped work in protest at work conditions.

Citing unacceptable minimum staffing levels and threats to employee safety after a riot at the prison in January this year, correction officers rallied and marched to the gates of the prison yesterday morning to voice their frustration.

According to the Community and Public Sector Union, it has been negotiating with prison operators, the GEO Group, since July last year.

“… In February this year, we said there were six things we wanted to focus on: a fair pay rise, an agreement on minimum staffing levels, extra annual leave, backpay, inclusion of catering officers under the agreement and compensation for public holidays,” CPSU representative Andrew Capp told the Gippsland Times.

“The agreement on minimum staffing levels has assumed far greater importance since the riot that occurred here, where four staff came very close to dying and a female officer was nearly taken hostage,” he said.

“That was a pretty mind-blowing thing to go through for a lot of people, and some of the people that were trapped in the shift office that day still haven’t returned to work, so it’s had a severe impact on them and their families.

“We think it is absolutely critical that an open campus prison, like Fulham Prison, has sufficient staff to ensure the safety of the staff, the prisoners and the public.

“We don’t believe we’re anywhere near that at the moment.”

“No-one’s health and safety will be affected — whether it be staff, prisoners or general public,” he said.

“We’ve left the minimum required level of staff that’s required to lock down the prison.

“The prisoners actually like that since they actually get the time they’re locked down for taken off their sentences.”

Union representatives will meet with GEO management tomorrow to continue negotiations, with employees prepared to continue with industrial action.

“We are prepared to escalate if they’re not going to be reasonable,” Mr Capp said.

“We’ve got 20 bans that were voted up under protected action.

“We’ve implemented six so far with another one to come in today, and if management here aren’t prepared to be reasonable, we will escalate.”

In response to the industrial action, the GEO Group criticised the lockdowns, saying they compromised the operation of the prison.

“The industrial action they have initiated includes rolling stoppages and work bans designed to affect the safe and efficient operations of the facility,” a GEO spokesman said.

“What these bans really mean is that we will be required to lock prisoners in their cells for long periods during the day.”

GEO called the demands “totally unreasonable”, stating the CPSU was asking for what effectively was a 58 per cent pay rise in the first year, with ongoing increases.

“Our rates of pay are more than comparable with corrections officers in government prisons throughout the state.”