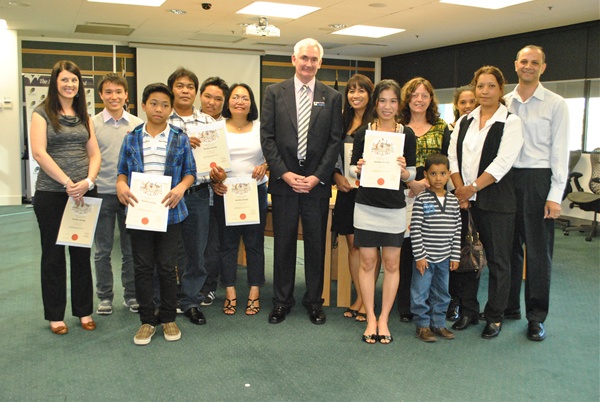 WELLINGTON Shire has welcomed 18 new citizens, as people from across the globe swore their loyalty to Australia at a ceremony in Sale last week.

“You are about to undertake a new allegiance, and with that comes a new responsibility,” Cr Cleary said.

“Being an Australian citizen is a status of which you may be very, very proud.

“Our country will surely gain a lot by you all becoming members of our nation.”

The new citizens were each gifted with a native sapling to plant, as a symbol of their new lives in Australia.

For Victor Ng, formally receiving his citizenship meant he finally felt he was part of his community.

“It’s so good to finally be recognised officially as part of my community after 12 years in this country,” he said.

“It meant a lot to have my friends here with me today, since my family is overseas still.

“I intend to honour all Australia’s values — starting with a barbecue!”