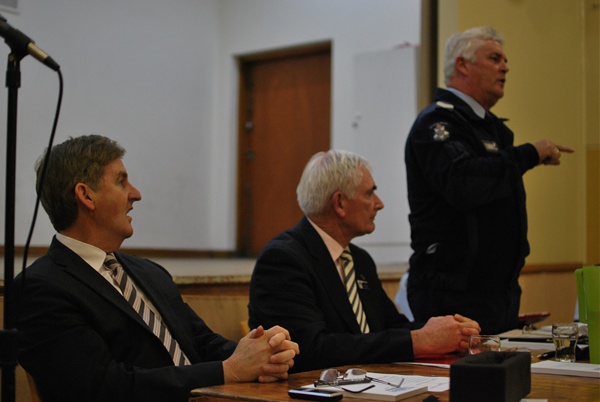 A ROAD safety forum in Sale on Friday night heard horrific stories from emergency services workers who regularly have to deal with the aftermath of road crashes.

Almost 50 people attended the forum, some taking along their learner drivers to impress on them that a tonne of glass and metal hurtling at high speed can be lethal if not respected.

But it was the story of Heyfield’s Lou Stewart which had the audience in tears.

She was involved in a car accident in July 2010 which has left her a quadriplegic and also claimed the life of a person in the other vehicle.

The accident was not her fault —another driver had failed to give way and ploughed into the side of her car on the front driver’s side.

Sitting in her wheelchair, date by date, she detailed the ensuing surgeries and long road of rehabilitation, where she had to learn how to eat, partially shower and to undertake continence care.

“I have no bladder control.

“This devastation happened to me through a lack of attention by another driver.

“My life will never be the same again.

“I don’t think I would have wanted to come home if it wasn’t for my family and friends and my husband.

“Take care because your life can change in the blink of an eye.”

Police and Emergency Services Minister Peter Ryan told the audience that as a solicitor, he had been involved in many cases where people had lost loved ones in collisions.

He said last year he had opened a Victoria Police forum attended by 350-400 highway patrol officers and had asked them for a show of hands on who’d had the task of knocking on a door to “deliver the news”.

“About 85 per cent of officers there put up their hands,” he said.

Mr Ryan said most accidents were preventable as roughly one third were due to inattention, a third to speed and a third to drink driving.

“This is the thing that makes you so angry — the devastation it causes.

“It can happen in the blink of an eye.”

Wellington Shire mayor Peter Cleary told the story of his then 18-year-old son who had attended an accident scene.

He stayed with a victim, a young man, reassuring him and talking to him while waiting for an ambulance.

“He died while he was talking to him,” he said.

“My son is a 40-year-old now and he still wakes up in the night with that.

“Every time you get in a car, whether as a driver or passenger, think, ‘I’m not going to end up dead’.

Officer in charge of Wellington Highway Patrol Sgt Dave Hynd said youth in this area accounted for one third of all people involved in road accidents, more males than females were injured, motorcyclists were over represented and 28 per cent of all penalty notices were issued to people under 25.

He told of one of the many times he had knocked on doors to deliver the news that a family member was dead.

Sgt Hynd recalled having to visit a local home to tell them their wife and mother had been killed.

“There were little kids — you don’t want to go there.

“It hurts, it hurts every time you have to do it.

“I have picked up a dead 11-month-old baby off the road.

“I have picked up body parts off the road.”

Sgt Hynd also talked of when he visited a local secondary school.

“I told the students to stand up and look around the room, ‘because two of you won’t be here next year’.

“I went back the next year and two of them weren’t there.”

“The memories they take from those things are with them for a lifetime and leave emotional scars,” Mr Rankin said.

He remembered being called to an accident some years ago, one of a spate of six fatalities during a three month period.

A car had crossed into the path of a truck and collided head on.

When he got to the scene a volunteer firefighter showed him a CFA baseball cap and CFA belt buckle.

“The person was unrecognisable because of the force of the impact.

“Only hours earlier I was working with him.

“That would have been about ‘97 and I can still remember that as vividly today as the day it happened,” he said.

“Be alert to what’s going on around you — road conditions, weather conditions, light and visibility.

“When you get in a car you are in charge of a piece of machinery that kills.

He said for every person killed, 10 were injured, including many who would need ongoing treatment and carry their injuries for a lifetime.

Mr Van Der Zalm talked about a recent trend of people turning up to accident scenes as a “social activity” after being alerted through social media, and where police had been called to control the crowds.

“It is not a social activity.

“You will see things you don’t want to see.

“You will see things that will haunt you for the rest of your lives.”

Struggling to control his emotions, he told the story of attending an accident in which two young people had been killed.

After recovering a licence, parents were called to identify one body.

Mr Van Der Zalm said he remembered when they unzipped the body bag, the woman screamed with relief.

She had been using her friend’s ID.

Gippsland Times general manager Lynne Smith praised the speakers for being so frank and forthright, especially Mrs Stewart who was speaking publicly for the first time since her accident.

“Everyone who spoke did it for one reason and one reason only,” Ms Smith said.

“That was to save lives, in particular young lives.

“I am grateful to those who turned out to attend what I believe is one of the most rewarding events I have been involved with.”

The Gippsland Times organised the forum as part of the Talk the Toll Down campaign which is running in conjunction with the Transport Accident Commission.