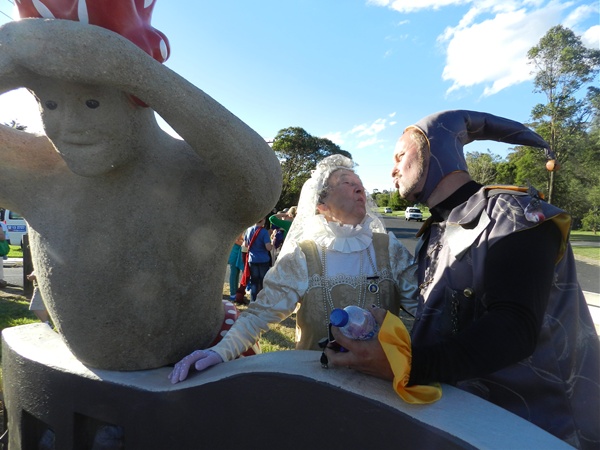 TWO hundred and fifty members of the Stratford community packed out the Mechanics Hall on Sunday for the opening of the Shakespeare festival and arts trail walk.

Shakespeare on the River Festival committee member Joan McCloud was also honoured, becoming the second member to be awarded life membership after serving on the committee for eight years.

“The arts trail was an 18 month project aimed to be opened today, made possible by a Festivals Australia grant,” he said.

“Joan (McCloud) and a few others wanted a presence all year, not just the few weeks that the festival runs for.

“It was an incredible undertaking with a small budget and great community support; just have a look at the trail and you will get an understanding of the man hours and love that goes into it.

“You ask someone to bring a shovel and they bring a bobcat so you can see just what the town of Stratford can do.”

Mr Roberts said the arts trail also had historical significance, with one sculpture across the road from the old Temperance Hall.

“We are hoping that it will be a permanent and ongoing community and tourist event,” he said.

“An MP3 player can be hired from the Courthouse for $3 with the MP3 including the historical aspects of the walk, a children’s story written by David Luxford and music, which has all been done in the last three years by the local community.

“Having people in such as tourists, we can interact with them listening to people of our town.”