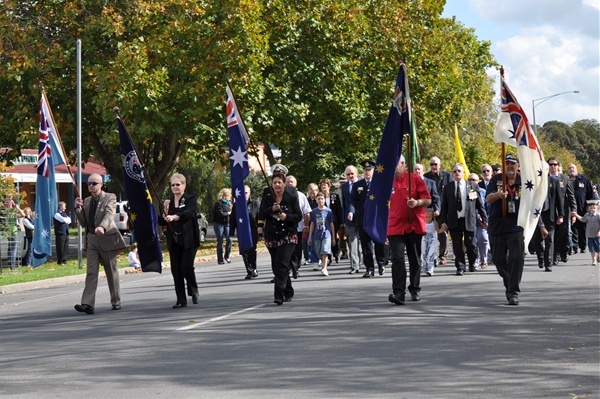 DURING Anzac Day’s services across the shire, recognition of the 70th anniversary of those events of 1942 during the Second World War that have been etched into the military history of Australia, will take place.

THIS year the commemorative service at Anzac Park will commence at 10am.

Those wishing to march are asked to assemble at the RSL Log Cabin at 9.45am.

On completion of the service everyone is welcome back to the Log Cabin for refreshments.

HEYFIELD RSL will conduct its Anzac Day service at the cenotaph in George St, Heyfield at 11am.

MAFFRA RSL will conduct a dawn service at 6am before hosting a breakfast at Shelton, the Maffra RSL clubrooms with all invited.

From 9am there will be a march from the Visitor Information Centre to the Memorial Hall, with a short wreath laying ceremony to be held at the completion of the march.

This will be followed by the Anzac Day service in the hall, with a guest speaker from Maffra Secondary College speaking on what Anzac Day means to him.

There will also be an unveiling of a memorial to Sgt David Hamilton Pruden of the 3rd Bushmen Contingent of the Boer War.

All are invited back to the Shelton for refreshments at the conclusion of the service.

PARADISE and Golden Beach senior citizens’ club will hold an Anzac Day service at 10am, at the flagpole in Golden Beach, followed by refreshments in the Golden Beach Community Hall.

A guest speaker from RAAF Base East Sale will be in attendance.

If weather conditions require the service will be held in the community hall, for inquiries phone Bill Hawker on 5146 3426.

ROSEDALE’S Anzac Day service is traditionally held at the cenotaph corner of Lyons and Prince Sts at 2pm.

The march will start from the clock tower on the corner of Cunninghame and Raymond Sts at 10.30am and proceed south down Raymond St turning left into Macalister St and finishing at the forecourt. There will be a disruption to traffic flow around Sale’s CBD to allow for the safe conduct of the march, between 10.15am until 10.45am in Raymond St and the southern side of Macalister St heading west from the Memorial Hall to the Raymond St intersection will be closed from 10.15am until about 11.30am during the main commemorative service.

SEASPRAY’S Anzac Day service will be held from 11am.

A fundraiser luncheon or barbecue will also be held at the conclusion of the service.

YARRAM RSL members will assemble at the corner of King St and Commercial Rd at 10.45am to march to the cenotaph at 10.50am. The Anzac service will be conducted in the Regent Theatre, with wreath laying taking place afterwards.