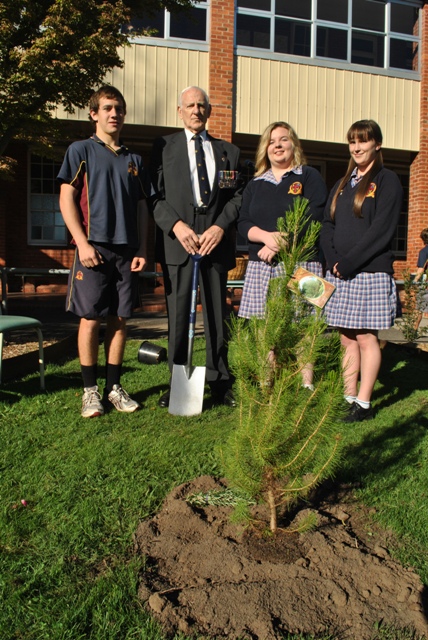 IN a tribute to its former students who went off to fight in war, Catholic College Sale planted two Lone Pines this week.

Planted on Tuesday by former Catholic College student and war veteran John Kelly, who also donated both saplings, the school paused to pay its respects to past students who were called to serve during major conflicts, including both World Wars.

Lone Pine was the scene of a major diversionary offensive launched by the 1st Australian Infantry Division on August 6, 1915.

The Turks had cut down all but one of the trees that grew on the ridge to cover their trenches.

The ridge, dominated by the single Aleppo Pine, became known as Lone Pine.

In three days of fighting the Australians lost more than 2000 men and the Turks’ losses were estimated at 7000.

As far as it is known, two Australian soldiers souvenired pine cones from the ridge and they found their way back to Australia.

Lance Corporal Benjamin Smith of the 3rd Battalion whose brother was killed in the battle for Lone Pine Ridge sent a cone home to his mother, who kept the cone for 13 years until 1928 before planting the seeds.

She grew two seedlings, one of which she presented to the town of Inverell and the other to the Parks and Garden section of the Department of the Interior, Canberra.

Mr Kelly said the Aleppo Pine would help to keep the memory of the Anzacs alive for students at Catholic College Sale.