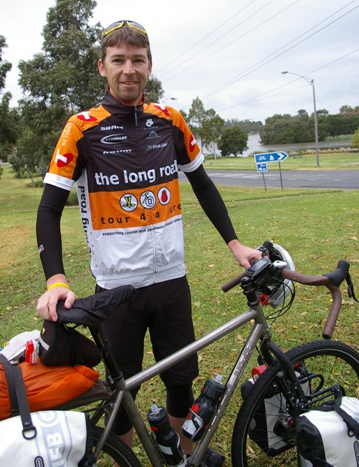 RIDING a bicycle solo across half the planet is a big challenge.

Raising awareness and funds for research for a cure for both Parkinson’s Disease and cancer is an even bigger challenge.

Ballarat man Jason Nestor has taken on the challenge of doing both at the same time.

In an endeavour to help find a cure for the afflictions his father David is suffering, Jason farewelled his wife Jane and daughters Jasmine, eight years, and Alicia, six on April 21 and hit the road carrying all his equipment on his bicycle.

He had previously ridden from Adelaide to Ballarat in a ‘pre-tour’ trial.

For the first stage of his travels Jason pedalled in the company of 10 friends from Ballarat to Geelong.

From Queenscliff he caught the Sorrento ferry before riding solo to Koo Wee Rup. Warragul was the next stop over, before copping a drenching between Warragul and Sale.

“I have done a fair bit of riding, road racing and mountain biking, but this the first time I have done any touring carrying all my gear,” he said.

With his 30 kilograms of camping gear and equipment on the bicycle Jason faces a few mountainous challenges on the way to Canberra.

“I will have to get used to them, as there are a few big climbs to come in America,” he said.

Riding about 110 kilometres each day Jason stayed in Sale with friends on Tuesday night, having suffered with the cold after his drenching at Trafalgar in Tuesday’s downpour en route from Warragul.

You can follow Jason’s journey and make donations on www.thelongroadtour.com