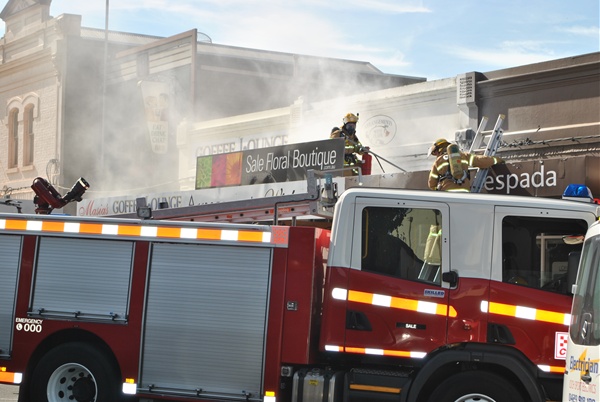 POWER was cut to several Raymond St, Sale, businesses and traffic disrupted after an electrical box caught fire at a business about 1pm on Monday.

“An electrical box caught fire and we used a dry chemical extinguisher to put out the fire,” he said.

“We are not sure of the cause but the fire was contained to the electrical switch box.”

MEANWHILE, the cause of a hay shed fire at Cobains on Wednesday is yet to be determined.

Crews from Clydebank, Maffra and Sale attended the blaze.

Mr Scheetz said the hay shed, measuring about 25 by 15 metres, was well alight when brigades arrived, with smoke from the blaze on the Cobains Rd property visible from as far as Sale.

Brigades pumped water from a nearby channel to contain the fire.

“There was up to 100 large round and square bales inside the building,” Mr Scheetz said.

“It took a considerable time to contain the fire.

“Being inside, we employed a 20 tonne excavator and backhoe to remove the hay.”

Police and CFA investigators attended but the cause of the fire is still undetermined.