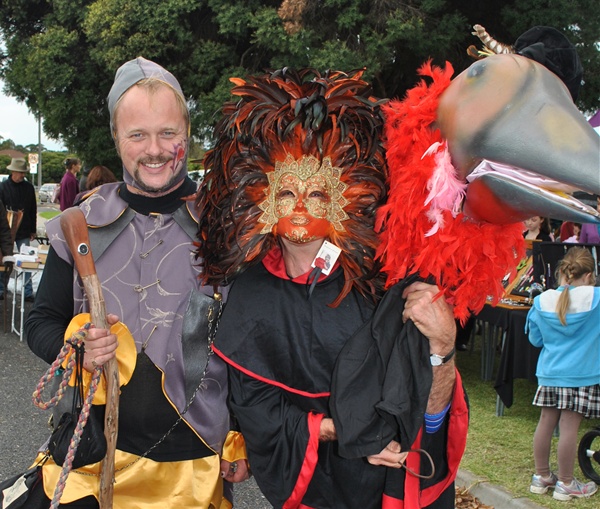 STRATFORD’S Shakespeare Festival is going from strength to strength, with people from across Gippsland and beyond flocking to the main festival day on Sunday.

This year was the festival’s 22nd year, its popularity showing no signs of waning.

“There were about 2000 people there last year and there would have been close to that this year,” he said.

He said the faire day featured more than 40 stalls, many of them selling quirky items such as miniature guitars through to Shakespearean quotes and bottles.

Another highlight was the Shakespearean banquet on Saturday night which was sold out.

The banquet was centred around the story of a large, heinous woman looking for a suitor.

Choreographed by Transvision Arts, it also included many local acts.

“People had never seen anything like it,” he said.

“Everyone just had a ball — it was something totally different,” Mr Roberts said.

Mr Roberts also praised the work of Groundwork Theatre which staged two performances under the direction of Deirdre Marshall and also presented many impromptu acts.

“People have an expectation that the plays will be of a professional standard, and it was,” he said.

At Sunday’s faire teenagers ran a jousting area, overseeing activities which were popular with youngsters, and young girls were proudly parading about in princess hats they had made.

“If a seven-year-old can joust with a 15-year-old in armour, that is just gold for him,” he said.

“In Victoria it’s probably the most professional theatrical community event.

“No-one else has the depth and skills or facilities for a community event like this and that is quite something,” he said.

Mr Roberts said some of the original organisers of the event were now in their 70s through to their 90s, and there had also been a big injection of younger people helping organise the festival which would ensure a promising future.

And the future is looking bright with a new batch of youngsters being trained in theatre.

A young thespians group for 10 to 14-year-olds meets regularly at the Courthouse Theatre and there’s also a theatre games group for six to nine-year-olds.

In years to come, Mr Roberts hopes some of these youngsters will help carry on the festival traditions.