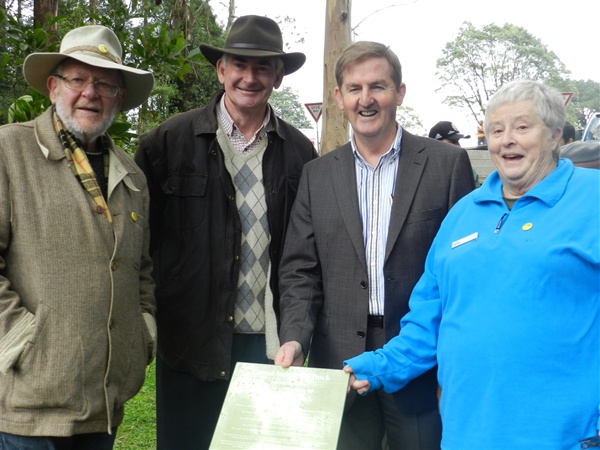 MORE than two and a half years work came to fruition at the weekend with the official opening of the Grand Strzelecki Track at the Morwell and Tarra Bulga National Parks.

The $500,000 project to link the two parks was made possible through the $4 million Bushfire Recovery Community Infrastructure Program, which is a joint effort by the Bendigo and Adelaide Bank Group, Community Enterprise Foundation and Regional Development Victoria.

“It has been a hectic two and a half years to bring it to fruition,” he said.

“Work started in November and it has taken until now to complete.

“The contractor for the project, Kevin Heggen of Hedley Range Services has done a fantastic job to keep the project on track to meet the completion date.

Rob Zwierlein of Warragul walked the Billy’s Creek section of the track in just three and a half hours on Saturday, and said he was impressed with the track.

“I live in Warragul but used to live in Yinnar and Jumbuck so I was keen to come home and have a look,” he said.

“It’s a great track and they should be proud of themselves.

“It’s not easy to build a track like that.”

Deputy premier and Gippsland South MLA Peter Ryan, who officially opened the track, said its completion was a testament to community recovery from the terrible times of the 2009 bushfires.

“The Wellington Shire section of the track involved the upgrading of existing tracks and river crossings, while the Latrobe Shire section involved the construction of a 34km walk connecting Jeeralang and Balook to Tarra Valley,” he said.

Latrobe City mayor Ed Vermuelen said the track would be a significant economic and social resource for Latrobe City and Wellington Shire councils.

Wellington Shire mayor Peter Cleary paid tribute to the many volunteers involved with the project.

“It has enabled this magnificent country to be more accessible to more people,” he said.