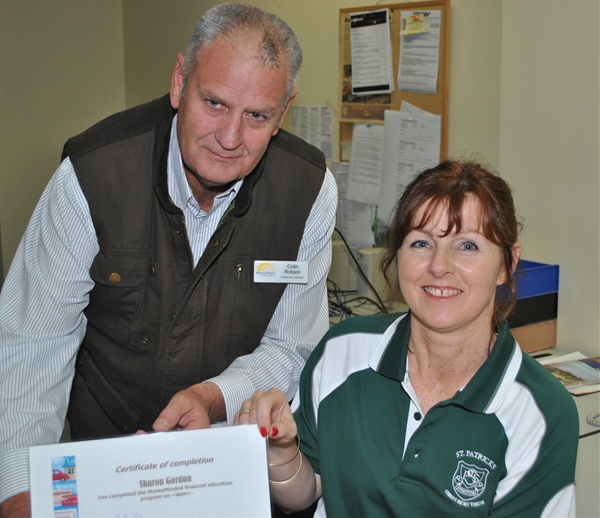 COL Robson has money to give away — and is encouraging eligible people to take up the offer.

Mr Robson is a relationship manager with Berry Street’s Saver Plus program, which is helping low income families to help save for education expenses.

The program provides an opportunity to have every dollar saved, up to $500, matched dollar-for-dollar for a person’s own or family member’s education-related expenses.

Sharon Gordon of Stratford is one local to take advantage of the project.

With two children doing VCE — one in Year 11 and another in Year 12 — it is an expensive time.

“The cost of schooling is just so high,” she said.

The money she has saved under the program, with the matched dollars, have helped buy a laptop and provided money towards camping trips and excursions for her children.

Participants must take part in financial skills workshops – informal educational sessions which allow people to share money ideas and tips and hear about strategies for planning, budgeting and saving for the future.

Mr Robson said the four sessions included tips about how to manage finances and money, how to shop better and information about financial scams and credit and other consumer issues.

In all, he said there was 10 hours of training.

But Ms Gordon, who works at St Patrick’s Primary School in Stratford in the library and as a school support officer, said it was all informal and took place in small groups.

“It makes you have a bit of a look at your spending, saving and budgeting — it’s very informative.

“Much of it is really reinforcing things that you know you should be doing anyway, but it makes you think about it.”

Mr Robson said the sessions encouraged people have a look at their spending habits — for instance instead of frequently buying 600ml bottles of softdrink at take-away outlets, it would be much cheaper to buy a pack at a supermarket.

He said little things could add up.

“After sitting down one participant calculated he was spending $16,000 a year on cigarettes,” he said.

“Another person was spending nearly $900 a year on coffee — that’s car rego and insurance right there.

“The program is big on wants versus needs.”

Eligible people or their partners must have a Centrelink Health Care Card or Pensioner Concession Card, be at least 18, have some regular income from work (casual, part time, full time or seasonal employment) and be a parent or guardian of a child at school or be attending or returning to vocational education themselves.

Once the financial goal is reached, savings are matched dollar for dollar up to $500, and are paid towards agreed items relating to education.

The program is an initiative of the brotherhood of St Laurence and the ANZ Bank.

Mr Robson is responsible for the program in Wellington Shire, and has run it in Sale, Stratford, Maffra and Heyfield.

He is encouraging more people to take up the offer.

He said it was mostly women who signed up — often divorced or separated who were raising children by themselves — but the program was by no means restricted to women.

“People can only qualify once, but once their kids turn 18 they can do it too (if they qualify),” Mr Robson said.

“With one family I’ve had four family members who have completed the program,” he said.

“It’s also good for apprentices and TAFE students — tools can be expensive and it can help.”