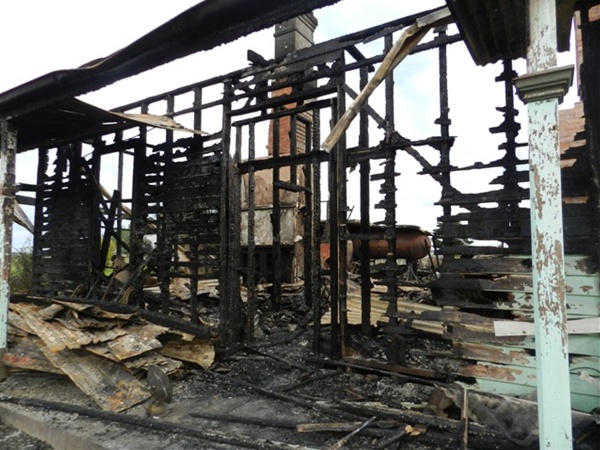 AN appeal has been launched for an Airly family in crisis following a house fire last Tuesday night which has left an 11-year-old boy in a critical condition.

The fire also destroyed the Hagan’s Rd home they were living in, and all their belongings.

The couple’s brother-in-law Nils Racevskis, who is co-organising the appeal, said Katrina Nuttall, Andrew Capper and their daughter Kaitlyn, 12 and son Christopher, 11, had just gone to bed when they heard loud explosions.

Andrew investigated and found the house had burst into flames.

The family escaped outdoors but discovered Christoper was missing.

It was then Andrew headed back inside, and looking under the smoke saw him unconscious in the floor about three metres from the back door.

“He dragged him out as he did the whole roof caved in,” Nils said.

He said Andrew suffered bad burns to the top of his head and hands, but it was Christopher he was concerned about.

The boy was rushed to Sale hospital by his family after receiving burns to 30 per cent of his body, on his head, neck and chest.

Melbourne’s Royal Children’s Hospital flew a specialist paediatric burns team to Sale, where they worked to stabilise him before flying back to Melbourne in the early hours of the morning.

He remains in a critical condition in intensive care at the Royal Children’s Hospital.

Andrew was also treated for burns.

He said he had burns to his lungs and had already had surgery for that and in the future he would need skin grafts to his face, neck and hands.

“It’s gut wrenching, but at the moment he’s stable” he said.

In addition, the family has lost all its possessions in the fire which investigators believe was caused by a clothes dryer.

Nils said he had sifted through the debris and found two little ornaments and a bit of charred jewellery.

Andrew had been planning to start his own business in garden and home maintenance, and his tools were destroyed in the blaze.

However, luckily, the family does have a home to go to.

Nils said they had been planning to move, and a rental property was now ready for them.

“Now we’re trying to put stuff in it for them,” he said.

The appeal has the backing of Foodworks, Sale, where Katrina is manager.

Owner Paul Feltis said a bank account had been set up, and there was a tin in store for people to donate to the appeal.

People could also drop off furniture, household goods and clothing at the store.

“The generosity of people has already been amazing,” he said.

Nils was also amazed at the support from the local community.

He said Andrew’s older car, which was not up to the task of running back and forwards to Melbourne, had been repaired by Barrie Smith Automotive and many other people have offered their sympathy and help.

But for now the family’s primary concern is Christopher, getting him out of intensive care and eventually getting him home.

How you can help:

Money can also be deposited in a Commonwealth Bank account for the family: