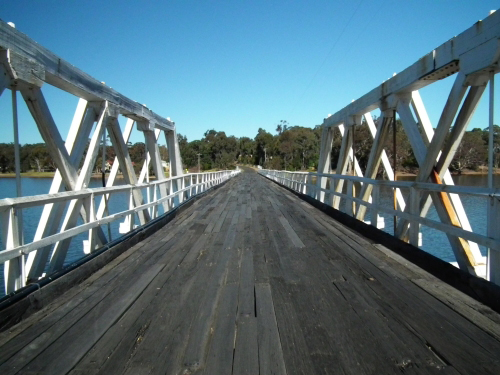 WORKS to repair Glenmaggie Bridge are set to begin in August after Wellington Shire Council approved a contract for it to go ahead.

The total cost of the rehabilitation is expected to be $1.64 million, which has been funded from the Federal Government’s Roads to Recovery Program.

The condition of the bridge, a vital link across Lake Glenmaggie between Glenmaggie and a residential development to the north, has declined in recent years, with its deck and timber trusses deteriorating.

Wellington Shire acting mayor Leo O’Brien said the project to repair the bridge had been a long and difficult process.

“For some time council has been awaiting an assessment by Heritage Victoria regarding the heritage status of the Glenmaggie Bridge,” he said.

“In May we received advice that the Glenmaggie Bridge is not of sufficient cultural heritage significance to warrant inclusion in the Victorian Heritage Register.

“We can now move forward with this project to provide the community of Glenmaggie and surrounding area with a reliable and significantly enhanced bridge structure.

“The advice of Heritage Victoria came just in time — the condition of the bridge declined recently and following an inspection in October 2011 the load limit was reduced from 12 tonnes to four tonnes.

“Without immediate action, council was considering the imposing of further restrictions to the bridge, including possible closure.”

Rehabilitation works will include replacing the deck, railing and timber truss with concrete and steel components. The design takes into account the aesthetic values of the bridge, using visually similar where possible.

“Staff have developed a design which is in keeping with the historical sentiments of the current structure and have been very sympathetic to the original design,” Cr O’Brien said.

It is antipated the works will take nine months to complete.

“We understand the significance that this bridge has in the local community and will be working to ensure that the community are regularly informed of works as they progress,” Cr O’Brien said.