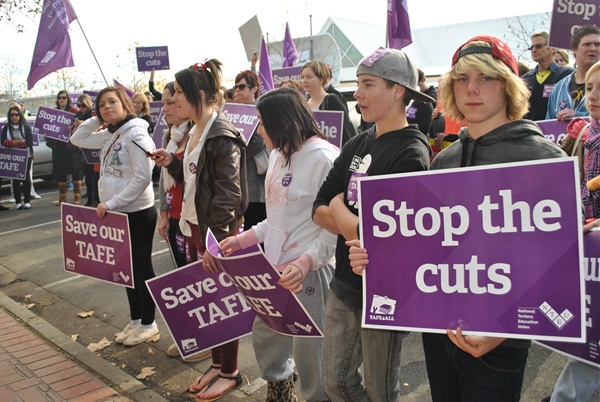 THIRTY-two jobs will be slashed at Advance TAFE because of State Government cuts to TAFE funding.

The institute has lost $5 million – $2 million more than initial estimates – in government funding, forcing it to cut 32 jobs, phase out 36 of the 215 courses currently provided, and close eight facilities.

All five outreach centres in Yarram, Heyfield, Orbost, Swifts Creek and Mallacoota will close from next week. Outreach Centres provide some classes and referral services to other TAFE campuses for communities located in remote areas.

The campus at 2 Desailly St, at the Port of Sale, will be closed from July 2012 and staff relocated to other Sale area facilities. It currently houses service teams, work safety centre and provides external meeting rooms and classrooms for the University of Ballarat students, whose classes will move to one of the other Sale facilities in semester two.

G-tec, the dedicated campus for Year 11 and 12 students combining an apprenticeship with studies, will close its Bairnsdale campus at the end of December. From 2013, students will study G-tec programs at the main Advance TAFE Bairnsdale campus. G-tec’s Sale campus is unaffected.

Sale training restaurant Café Rossi will be put up for sale.

Advance TAFE was bracing for the worst, as it finally views the full impact the State Government’s $300 million funding cuts would have on its operations.

More than 100 people are estimated to have attended each rally, which included students aged in their teens up to mature-aged students in their 50s and staff members.

Advance TAFE chief executive officer Peter Heilbuth had the unenviable task of revealing the restructure of Advance TAFE and its operations to staff on Thursday, as the institute is estimated to lose $3 million in annual funding as part of the $290 million statewide funding cut.

The extent of the restructuring has not been disclosed to the Gippsland Times, because it had not been released to staff before print deadline.

However, at the rally in Sale on Wednesday, National Tertiary Education Union representative and Advance TAFE staff member Anne Kinne said the outlook was bleak for Advance TAFE.

“I have seen many changes over the years — but never anything like this,” Ms Kinne told the crowd outside Mr Ryan’s offices.

“The full impact of the Baillieu Government’s funding cuts for Advance TAFE … will not be known until tomorrow, when our CEO, Peter Heilbuth, reveals our restructure.

“But he has said, to all of us at the briefings, that they will be significant.

“We know it will mean course closures.

“There will be job losses.

“There will be campus closures.”

Students and family members also voiced their concerns at the rally, with mature-aged student, Michael Kelly, explaining the funding cuts could mean losing his last chance at gainful employment.

“I’m in my 50s and I’m studying a general education course which I was hoping to lead onto a business course,” he explained.

“I was hoping to eventually look at getting a job as a quality manager or assistant manager.

“Now, I have to go looking for any kind of work.

“TAFE was my only opportunity at my age.”