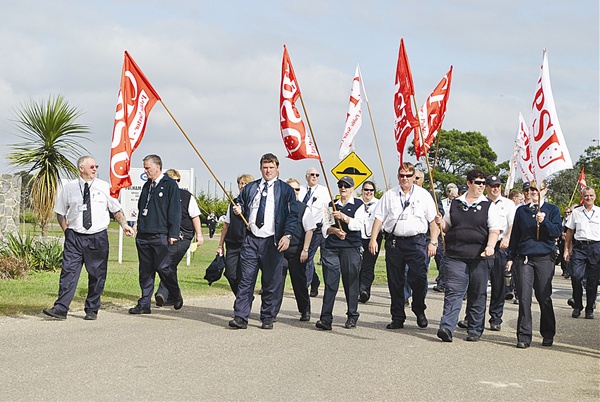 FAIR Work Australia has handed down a decision on the Fulham Correctional Centre enterprise agreement.

FWA arbitrated after negotiations between the Community and Public Sector Union and Fulham Correctional Centre management failed to reach an agreement.

The CPSU has stated it is satisfied with the outcome, with FWA deputy president Gregory Smith deciding on a quantum pay rise of 3.7, 3.6 and 3.6 per cent pay rise respectively each year, along with a $300 sign on bonus for all employees and a five per cent skills allowance for trainers and fire awareness.

Fair Work Australia had set a deadline of Friday, June 8 for the parties to come to an agreement before it made a binding decision for them. The deadline followed a dispute that ran for months, which included the CPSU undertaking protected industrial action.

Outstanding issues to be agreed on included pay rises for employees at the prison as well as backdating any pay rises, public holiday compensation, including catering staff in the agreement and the inclusion of a discipline clause in the agreement.

The CPSU had lifted its bans and industrial action in the lead up to the Fair Work Australia deadline, and both parties were confident an agreement could be reached to prevent the need for FWA to hand down a decision.

However CPSU representative Andy Capp said Fair Work Australia deputy president Smith had been compelled to make a decision after both parties could not come to an agreement on all of the outstanding issues.

“Deputy president Smith sat in Sale Courthouse for three days to discuss the issues to be resolved and he made a decision,” he said.

“The two skill allowances are at five per cent each for trainers and fire awareness.

“While we didn’t get everything we wanted, we are happy with the result.”

Mr Capp said he was confident the new agreement would be voted up by employees.

“We are in the process of tidying up the new agreement and we are confident it will be voted up,” he said.

“We are hopeful that will go to staff in a couple of weeks.”

Mr Capp said consent arbitration talks on staffing levels would begin through Fair Work Australia as soon as the new agreement was finalised.

17/06/2021
THE state government is being asked to explain what is proposed with its Gippsland Renewable Energy Zone and the impacts – positive and negative...