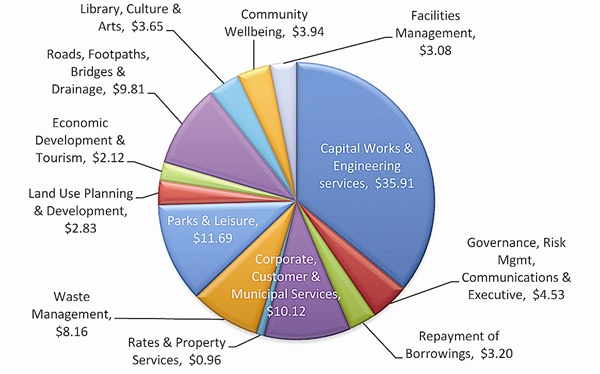 WELLINGTON Shire rates will rise by 5.1 per cent, with council unanimously adopting its 2012-2013 budget when it met on Tuesday night.

No discussion or debate on the draft budget took place in the council meeting, all number crunching apparently having taken place in briefing committee.

An additional $4,158,708 will be raised through garbage, waste infrastructure and EPA levy charges.

After a lengthy description of the budget by Cr Jeff Amos, acting mayor Leo O’Brien allowed councillors to comment and most were anxious to justify the increases in rates and charges and explain how the budget expenditure would benefit the community.

Cr Gregg Cook argued that even if the council did nothing more than maintain its existing infrastructure, its costs would increase at a rate greater than the rise in the Consumer Price Index.

He argued there was a need for local government to be allowed to raise revenue through means other than property rates, which are a poor indicator of a ratepayer’s ability to pay.

Cr Malcolm Hole argued the community was happy with the budget as there had been only three submissions on the draft budget.

A $6,257,000 decrease in projected income forced significant changes to the draft budget, because of delays in council’s capital works program and the earlier than anticipated receipt of Country Roads and Bridges funding and council’s Victorian Grants Commission 2012-13 allocation being received in the current financial year.

The total value of capital works in the budget is $24.3 million, $1.2 million lower than the forecast total for the 2011-12 financial year.