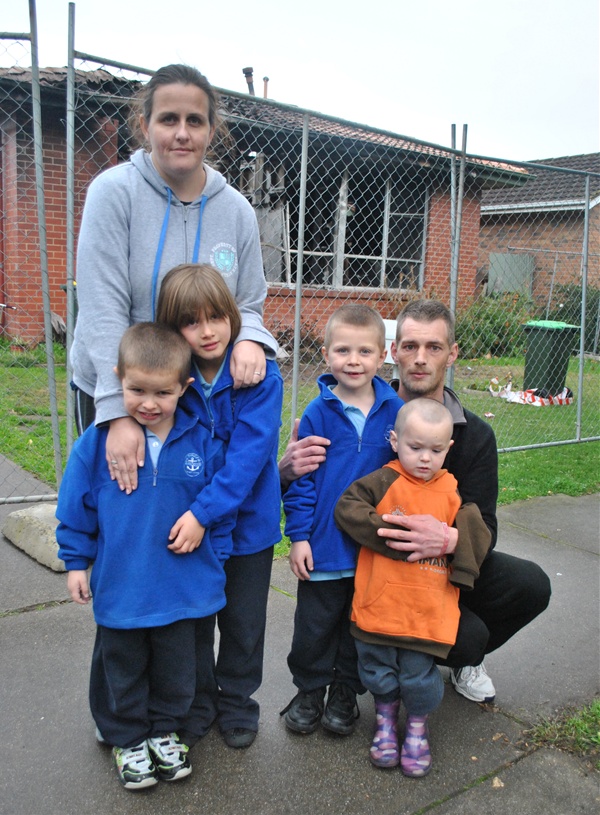 A SALE family which lost everything in a house fire more than three weeks ago is still trying to find a home in Sale.

Jolene Monahan, her partner Lee Hamilton and children Ebony, 7, Hayden, 6, Riley, 5, and Matthew, 3, were lucky to escape their Department of Human Services home when in burst into flames about 2am on June 5.

Jolene said she awoke to flames, Lee adding he threw her out of the house before going back in for the children.

“I got three of the kids out but I couldn’t find Matthew,” he said.

“A neighbour came flying out of his house.

“I smashed a side window and he went in the house and found Matthew.

“About 30 seconds later the roof collapsed.”

Lee said he would be eternally grateful to his neighbour.

“If it wasn’t for him we wouldn’t have Matthew,” he said.

“It’s just priceless what he did.

“We can’t thank him enough.”

Jolene and Lee said they had been offered a DHS house in a nearby town — which was not yet ready to move into — but said they wanted to remain in Sale.

But they said the department had told them if they didn’t accept it, they would be placed at the bottom of the list and would not continue to be a high priority.

A DHS spokesman confirmed they had been offered and had accepted a house in the local area.

He added that a local support agency, funded by the Department of Human Services, was paying for the family to stay in a motel until the property became available.

However Lee said the family felt they’d had no choice but to accept the house — but what they really wanted was to stay in Sale.

CFA district 10 operations officer and fire investigator Wayne Petford said an investigation into the fire was almost complete, but the result would not be made public.

Guthridge Primary School, where the children attend, has organised an appeal for the family.

Larger items such as furniture and beds are being placed on a register for when the family has a house.

Donations of clothing, toys, books and kitchen items can be made at the school and there is also a trolley for people to place non-perishable grocery items.