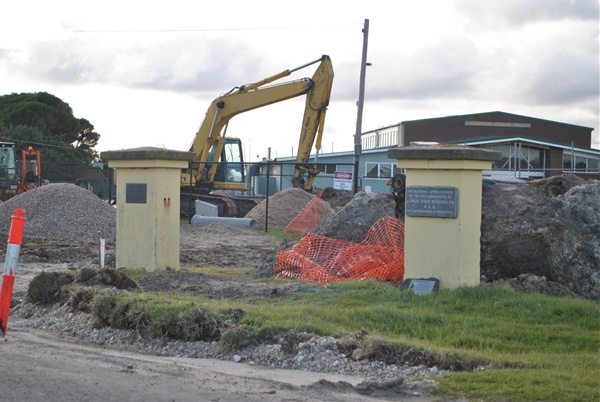 PLANS to relocate the memorial gates at Seaspray Recreation Reserve remain at a standstill, with the contractors forced to wait until the ground is firm enough to enable the concrete structures to be moved.

Initial moves to relocate the memorial gates and supporting pillars erected to commemorate the work of the “Father of Seaspray”, James McLachlan MLA had a number of the town’s residents up in arms.

A small group of protesters gathered at the gates on May 17, preventing the Seaspray Reserve Committee of Management contractors from removing the gates for restoration and relocation.

Redevelopment plans for the town’s recreation reserve to incorporate a new caravan park had included the relocation and refurbishment of the memorial gates, but the protest resulted in the management committee offering the responsibility for the preservation of the gates to the community’s ratepayers association.

Seaspray Ratepayers Association president Ann Guilfoyle said a majority had voted for the removal, relocation and restoration of the gates.

Ms Guilfoyle said the association hoped to have a clearer idea of when the gates would be moved following a meeting on Tuesday, July 10.

Association member Betty Jolley said she understood that the gates would be removed, relocated and carefully restored by the Reserve Committee of Management.