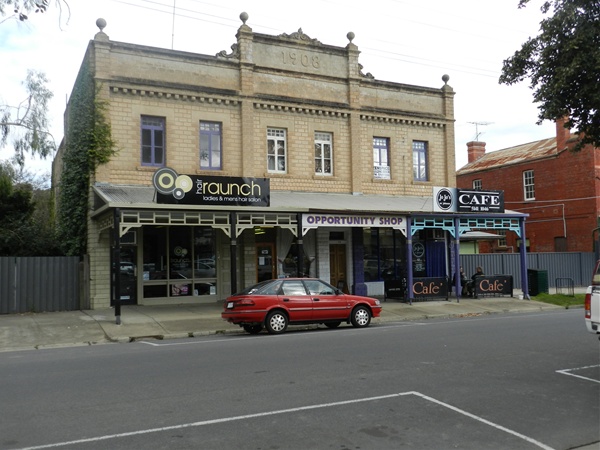 THE Foster Building in Maffra’s Johnson St has been recommended for heritage listing.

Heritage Victoria said the Foster Building was a two-storey commercial building made of hollow concrete blocks,constructed in 1908 for the prominent local landowner Askin ‘Alf’ Foster.

It was designed by the Maffra architect Stephen Ashton.

“It is an early example of concrete block construction, which began to be adopted in Victoria in about 1905, when American block-making machinery became readily available,” Heritage Victoria explains on its website.

“The main advantage of concrete blocks was that they could be made by owner-builders or unskilled labour on-site, using hand-operated machines, a range of moulds, and sand and gravel obtainable nearby; only the cement had to be transported.

“So both transport and labour costs were minimised, which explains the widespread use of concrete blocks in country areas.

If the heritage listing does proceed, Heritage Victoria will need to be consulted when considering or making decisions regarding works to the building.

It is also recommended that a Conservation Management Plan is undertaken to assist with the future management of the cultural significance of the place.

If it is successful, the entire site will be protected.

Owners and interested parties now have the opportunity to comment on these recommendations in the form of a written submission, which must be received by Heritage Victoria by 5pm on August 21.