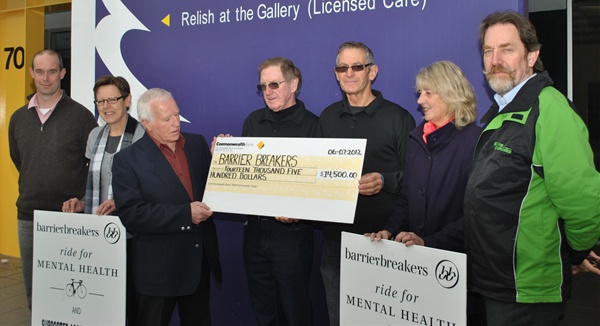 CONSTRUCTION of a six unit complex in Traralgon to provide supported accommodation for those with a mental illness could begin as soon as October, with a group of local veteran cyclists making a significant contribution to the fundraising efforts from their second charity ride around Gippsland in support of the cause.

Embarking on their second tour of Gippsland in support of the Barrier Breakers cause, Lance Hunt and Iain Fraser continued on with the success of last year’s ride which raised more than $10,000.

In their 1000 kilometre ride through Gippsland, the LG Cycling group, headed by Lance Hunt of Sale, lifted the profile of mental illness in a community awareness program and also raised funds for the development of units of supported accommodation for people with a mental illness.

The ride commenced in Sale on March 13 and the cyclists travelled through most Gippsland towns from Orbost to Cowes and finished in Sale again on March 20.

The ride has also initiated interest in establishing a Barrier Breakers support network in east and south Gippsland, with a long term view to establishing supported accommodation in Sale and Wonthaggi.

The supported accommodation will provide clinical support from Latrobe Regional Hospital and provision of outreach services by MIND Australia.

Mr Amos said the organisation was well on track to raise the $150,000 shortfall for the project thanks to community support.

“To date, we have secured government commitments of around $1.2 million for the project with Barrier Breakers undertaking to raise $150,000 from public subscriptions,” he said.

“We are having another one of those in August and they are optimistic; they reckon they will raise $50,000.”

“It is a real tragedy that so many homeless people in Gippsland suffer from mental illness and it is a privilege if we can help in some small way to raise community awareness of their plight,” he said.

Mr Hunt said funds were still coming in to support the cause, with collection tins remaining in shops in Sale, Maffra and Heyfield.

“I collected the money and banked it yesterday and they (the collection tins) are still there,” he said.

“The account will be kept open and we will be collecting all the time.”

Mr Amos said construction of the supported accommodation could begin as soon as October, subject to the signing of a lease agreement for the land.