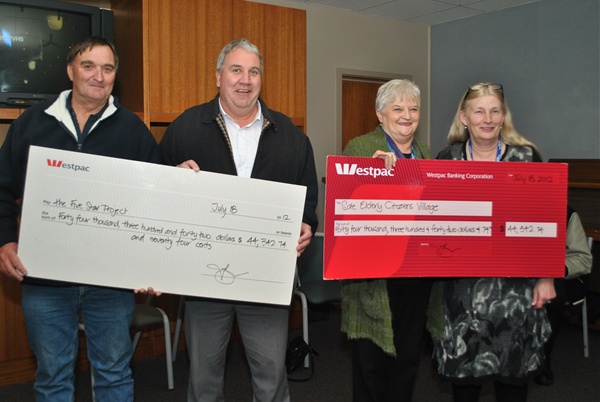 WITH the local Dancing With Our Stars event selling out in five days, organizers had hoped that the enthusiasm for the event would spill over into financial contributions, and, with the final amount being tallied at nearly $90,000 it would seem their hopes were realized.

The Five Star Project and the Sale Elderly Citizens Village have each received cheques for $44,342.74 — a 50/50 split of the total funds of $88,685.48 — which organizers and dancers are hoping will make a significant difference to the two organizations and their future.

According to Five Star Project director Leo O’Brien, the money raised helped the project pay off the balance owing on its latest development — the community room at the Howard St units, which offer supported living for young people with mild disabilities.

The leftover money from the funds raised by Dancing With Our Stars will now go towards the Five Star Project’s next mission.

“Money from this will now go towards the next stage of our project, which will be to develop a higher care facility for young adults who may need a little bit more assistance with their day to day living,” Mr O’Brien said.

“We’re very, very grateful for all the work that’s gone into helping us get this funding.”

The Sale Elderly Citizens Village will use the funds to upgrade facilities in Ashleigh House, home to 75 residents, both high and low care and includes Burditt Manor, a wing established for residents living with dementia.

Sale Elderly Citizens Village chairman Brenda Burditt said the money was much appreciated and would be put to good use by the facility.

“On behalf of everyone here at SECV, we’d like to extend our most sincere thanks to the organisers, to Jodie (Willis) and her team, and especially to the dancers who did such a fantastic job,” Ms Burditt said.

“Thank you all ever so much.”

With the proceeds from the 2011, Dancing with Our Stars, the event has now delivered almost $150,000 to local organizations and injected an estimated $300,000 into the local economy with accommodation, service and retail industries all benefitting.