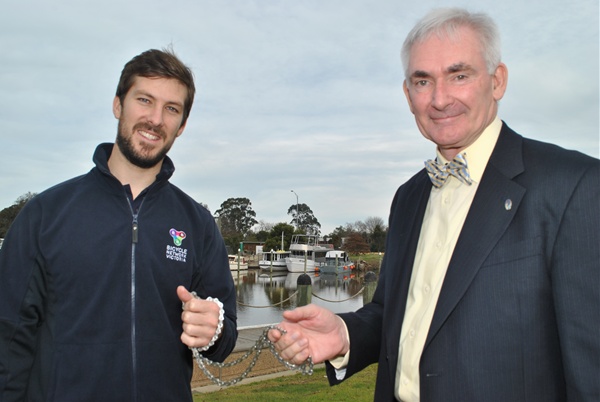 WELLINGTON Shire has been chained to the Bicycle Network Victoria’s Around the Bay in a Day.

During the past 20 years Around the Bay has grown to become Australia’s largest mass participation bike ride.

The event’s organising body, Bicycle Network Victoria, has recognised the long-standing contribution riders in Wellington Shire have made to Around the Bay by presenting mayor Peter Cleary with a portion of the ‘Bay Bike’.

The ‘Bay Bike’ is a symbol which recognises the contribution of regional riders, with a piece of the bike presented to prominent regional communities during July.

The ‘Bay Bike’ will be assembled and displayed at the Bupa Around the Bay Festival, Alexandra Gardens, in Melbourne between October 19 and 21.

To date, Wellington Shire has produced 370 Around the Bay bike riders.

With ride lengths starting at an achievable 50km, Bicycle Network Victoria is encouraging more Wellington Shire community members to take up the challenge and participate in the 20th Around the Bay event in October.

Event manager Michael Russell said during the past 20 years regional Victorians had contributed largely to the success of Around the Bay.

“As we lead up to the 20th year celebrations, the ‘Bay Bike’ is our way of publicly recognising Wellington Shire’s contribution to our historic event.”

Cr Cleary said he was proud to receive a portion of the ‘Bay Bike’ on behalf of Wellington Shire riders.