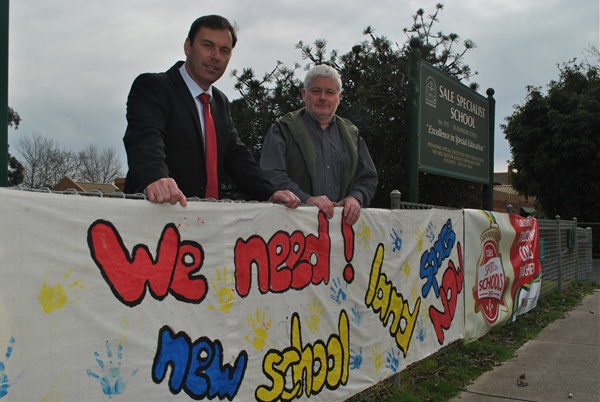 Shadow Parliamentary Secretary for Education Colin Brooks visited the school on Wednesday to see the dire situation at the school’s two campuses in Sale.

The school, which was originally built in the 1980s for about 25 students, now hosts 77 students across its two campuses in Raymond St and Guthridge Parade.

The Guthridge Parade solution was only temporary, and if no reprieve is available by the start of the 2013 school year, disabled students in Wellington Shire will have to be put on a waiting list to attend the school. They will have to attend either mainstream schools or travel to Bairnsdale or the Latrobe Valley in the interim.

Mr Brooks was appalled by the current facilities at Sale Specialist School ­— which include a re-purposed shipping container to house sporting equipment, where most other schools would have access to a purpose-built gymnasium.

“The facilities . . . are in obvious need of replacement,” he said.

“Particularly with specialist settings, the students in the schools need appropriate facilities to ensure their safety, the safety of staff and also to ensure that they are able to learn.

“These are children who are facing hardships from the word go, so they need facilities that give them the very best chance of learning and these facilities just don’t provide that.”

Mr Brooks called on Mr Ryan to support the school’s campaign, stating that since the media coverage on the school’s plight began last month, Mr Ryan had been “missing in action”.

“The place is ridiculous.

“A new school needs to be built. Simple as that.

“A new site needs to be allocated, and a new, purpose-built specialist school needs to be built.”

In a response to the Gippsland Times, Mr Ryan asserted he had been working closely with the school community to try and secure new land for the school to expand, including meeting with parents from the school.

“The major issue is to identify a greenfield site on which to build a new school,” he said.

“A possible location on Cobains Rd was considered but for various reasons it has been discounted.

“An alternative site is now under active consideration and negotiations for a prospective purchase of the land are underway.

“I will continue to work with the school community to resolve this long standing and critically important need as soon as possible.”