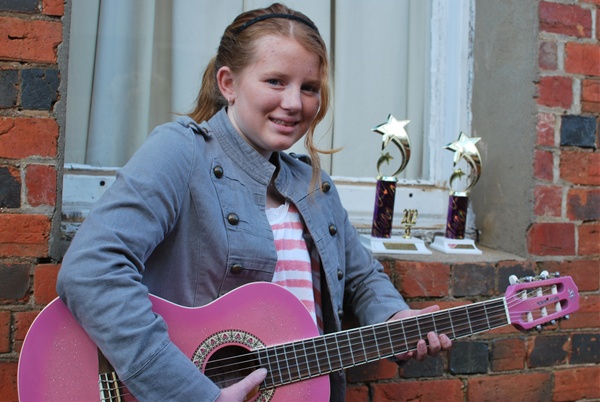 A BUDDING local country singer has taken out top honours in a junior talent contest at the home of country music, Tamworth.

Twelve-year-old Tayla Clavarino was dubbed one of the overall winners of the Capital Country Music Association’s Junior Winter Talent Quest at Tamworth earlier this year.

Tayla won the 12 and under section; an impressive feat, considering this was her first time attending the Junior Winter Talent Quest.

Tayla had to perform three songs — a version of Amazing Grace, Temporary Home by Carrie Underwood and her favourite, Our Song by Taylor Swift.

“It’s a fun, happy song and I really like singing it.”

Tayla admitted she had a few difficulties with her performances on the day, saying nerves got to her for her first performance.

However, after receiving praise from the judges, her spirits were lifted and her second performance got her through to the finals.

She again experienced some road bumps in her last performance, with some technical difficulties.

“I had some bad microphone feedback, but I got over it,” she explained.

Her mother, Tracey, explained she and Tayla decided to go to the competition to simply give Tayla the experience of attending a contest somewhere like Tamworth.

Neither expected Tayla to do as well as she did.

“She did really well in the eistedfodd this year, and one of the judges said “she needs to go to Tamworth,” Tracey said.

Winning the overall award has paved the way for many famous country singers in Australia, including the McClymont sisters, who won it when they were Tayla’s age.

While Tayla has been taking singing lessons for the past four years, this year she branched out and picked up the guitar.

She has now been asked to return to Tamworth in January next year for a week-long camp, where she will focus on honing her musical and song writing skills.