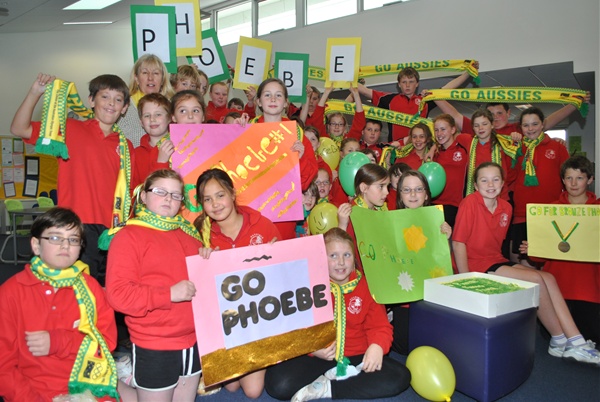 STUDENTS at Heyfield Primary School have been getting into the Olympic spirit, supporting Phoebe Stanley and other members of the women’s eight rowing team which crossed the line last in the final at the Olympic Games in London.

Australia entered the blue-riband race with high hopes of winning a medal and was fourth at the half way point of the race before its lane one draw in crosswind conditions took its toll.

Despite the solid start, the team was never in the hunt, with defending champions the United States dominating from the outset.

Canada, the Netherlands, Great Britain and Romania also finished ahead.

While Geelong-born and raised Stanley had the support of her mother, two brothers and boyfriend in London, her aunt, Alie Lofting, a grade 3-4 teacher at the Heyfield Primary School and students provided a wave of support locally.

Ms Lofting said students had been getting up especially to watch her niece and the team in races and had followed the team’s progress as they attempted to qualify for the Olympic games right through to the final on Thursday night.

For Stanley and the team, the path to the final was a quick one, with the hastily arranged team earning the nickname of the ‘Motley Crew’.

Selected as a reserve for the pairs in Beijing, Stanley led fellow Olympic rejects and rising youngsters in a hastily arranged eight which kept pounding on Rowing Australia’s door insisting on a chance to compete in London.

“It was a last minute pick, Rowing Australia weren’t going to take them so they weren’t even expected to qualify (for the Olympic Games),” Ms Lofting said.

“They were given four days to post an Olympic time at Penrith and they did, so they had to take them.

“They raced at Lake Lucerne (Switzerland) to qualify and they won both races.

“There are three teenagers on the team who had never raced internationally and they have mixed with the older, more experienced team members like Phoebe and the team has really gelled.”

Stanley, who is the team’s stroke, had to also overcome her own challenges to get to London after being sent home from the world championships last September with a heart problem.

“For six weeks she wasn’t allowed to do any exercise,” Ms Lofting said.

“Her heart was up to 200 beats a minute and she was unsure if she would ever be able to exercise again, but she re-visited the cardiologist, who knew he was dealing with an elite athlete, and got the all clear.

“She had been rowing since year eight and her dreams were shattered at the World Cup, but she has turned it around and worked towards getting to the Olympics.”

Ms Lofting said she hoped Stanley would visit the school after returning from the games in London.