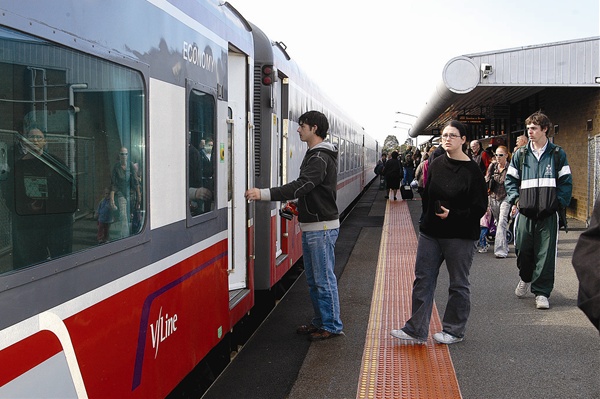 A PLAN to axe Gippsland’s V/Line train services to Melbourne has angered locals.

The plan, announced by Melbourne Metro, which is responsible for metropolitan train services, would result in all Gippsland’s V/Line train services on the Bairnsdale and Traralgon lines terminating at Pakenham instead of Melbourne’s Southern Cross Station.

Under the plan, country travellers would then have to switch to a metro service at Pakenham to get into Melbourne’s CBD.

The justification was to help ease congestion on the Dandenong line, which according to Public Transport Victoria, the regulating body for public transport, is operating at its limits.

“The Dandenong corridor is operating at its limits therefore every option on how to improve performance and get extra capacity will be considered by Public Transport Victoria,” a PTV spokesperson told the Gippsland Times.

Should the plan go ahead, it would result in an additional two million commuters crammed onto suburban trains on the Pakenham lines each year.

The move would also leave Gippslanders as the only rail users in the state forced to switch services to get to Melbourne’s CBD.

The proposed changes have been howled down by locals, with local advocacy group the Committee for Wellington saying the changes could have dire consequences for Gippsland.

Committee chair Jodie Willis said this option had the potential to further disadvantage travellers and potentially dissuade businesses from investing in the area.

“With the area already feeling the impact from TAFE funding cuts and appearing to receive little benefit in infrastructure spending from the 2012-2013 State budget, changes to the Vline services as outlined by Metro will not only affect business commuters but also the aging population and the school groups using V/line for school trips to Melbourne.”

Gippsland East MLA Tim Bull condemned the proposition, saying the State Government had “no plans to terminate V/Line trains travelling to or from Bairnsdale or Traralgon at Pakenham”.

“I strongly support the Transport Minister’s comments that Gippslanders have as much right to expect their trains to operate to and from Melbourne’s CBD and busy junctions such as Caulfield and Dandenong, as do Victorians living on the Ballarat, Bendigo, Geelong and Seymour lines,” Mr Bull said.

“From time to time agencies and departments present proposals to government for consideration.

“All Gippsland line V/Line trains continue to either originate or terminate in the city and there are no plans to change this,” Mr Bull said.

Morwell MLA Russell Northe said additional services to benefit regional and metropolitan networks were planned, including the commitment of at least 30 new V/Line rail cars to expand the capacity of regional networks.

“Whilst I support the need to improve and upgrade the Gippsland rail network, the proposition of a Pakenham interchange is not something local commuters would deem as acceptable,” he added.