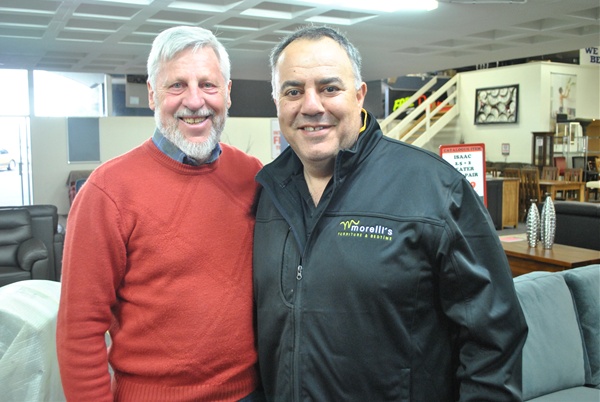 THE cancellation of last year’s Christmas parade has proved the catalyst for the end of an era for Sale Community Business Association, with long serving president Nick Morelli and foundation secretary Jim Pennell to hand over the leadership reins at the annual general meeting at the end of the month.

Mr Morelli said while he and Mr Pennell had intimated the need for a “changing of the guard” two years ago, the cancellation of last year’s Christmas parade was a major disappointment that contributed to the decision to hand over the reins at this year’s AGM.

“It was embarrassing, frustrating, and probably the catalyst for us to say it is time for new people,” Mr Morelli said.

“We intimated at least two years ago that it was time for new blood to come in,” he said.

“I have been president for 10 years, Jim has been secretary for a dozen or so years, and we have identified that the time has come.

“The last couple of years we have been encouraging new people in the community to take over (the leadership) but it has been difficult, so we have both decided to pull the pin.

Mr Morelli, who will outline some of the association’s major achievements before handing over the presidency at the annual meeting, said the SCBA voucher reward system instigated by Mr Pennell had injected more than half a million dollars into Sale’s retail economy.

Mr Morelli said other achievements included subsidised radio and television advertising to attract shoppers and businesses to Sale, along with Christmas decorations, music and lights.

Mr Morelli said they had left the SCBA in good shape.

“We have good numbers and have left it in a very sound position financially,” he said.

“We have 60 to 70 financial members who have reaped the benefits of these things.”

Mr Pennell, who was foundation secretary of the association in 1996, said a planning meeting ahead of the changeover at the annual meeting was well supported.

He said there were plans for a membership drive.

Wellington Shire Council was contacted for comment on Tuesday, but had not responded before going to print.

A council response, if forthcoming, will be published in Tuesday’s Gippsland Times.