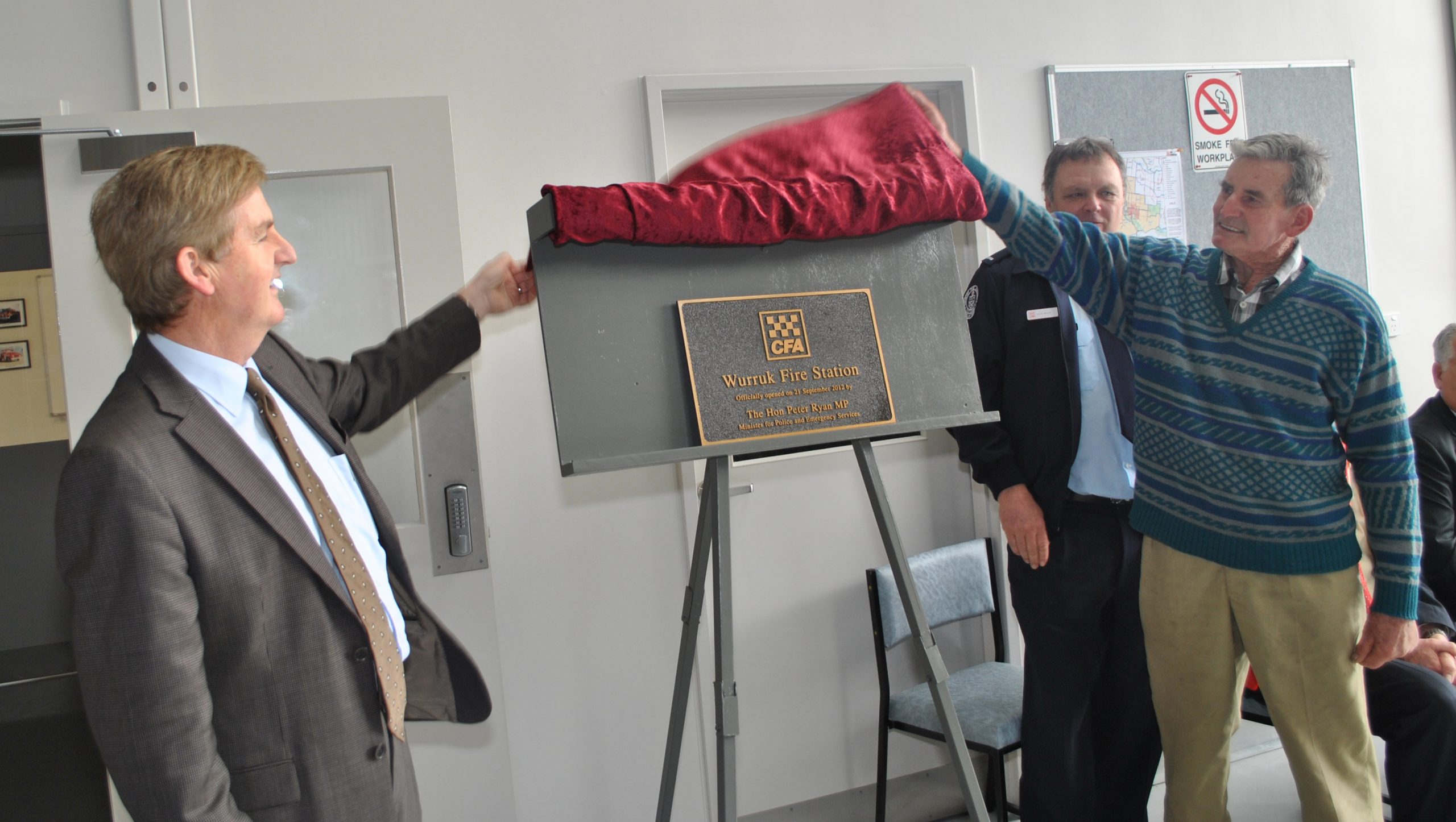 WURRUK will be better equipped to respond to the threat of fire thanks to the opening of its $450,000 CFA station.

Officially opened by Acting Premier and Minister for Police and Emergency Services Peter Ryan on Friday the station is home to elements of the Sale Fire Brigade, with which the Wurruk fire brigade merged last year, because of dwindling volunteer numbers.

However the growing residential development south of the Princes Highway now presents an increased risk of building fires and has created a need for a local and prepared fire service, as well as offering a potential volunteer recruitment opportunity.

“The Sale brigade is extremely busy attending 200 to 230 incidents every year – ranging from building, bush and grass fires, to car accidents and calls for help so having increased assistance from Wurruk is crucial,” Mr Ryan said.

“The new station is a vast improvement on the 65-year-old shed used previously. It has modern and comfortable facilities, training and meeting rooms, dual bays for storing two fire fighting appliances and equipment, and rainwater harvesting tanks.”

“Local agencies such as Sale and Wurruk CFA are the backbone of Victoria’s emergency service response and it is crucial that we continue to support their efforts, particularly on the front line,” he said.

Mr Ryan forcefully refuted any suggestion the $41 million reduction in funding for the CFA this year would impact on its front line services.

“We are not copping that (criticism), the CFA is on the second largest budget in history, second only to last years when its largest ever budget was in direct response to the Black Saturday Bushfire Royal Commission’s recommendations,” he said.

“In 2012-13, the Victorian Coalition Government has allocated almost $57 million to emergency services, including $22.9 million to build or upgrade rural fire stations across the state.”

“We have built or upgraded 250 stations in our first term in office, and provided 101 new vehicles last year and spent $8.5 million to support CFA auxiliaries.”

Mr Ryan and Wurruk CFA honorary life member Wesley Heywood then officially opened the Wurruk CFA station by unveiling a bronze plague to be displayed at the station.

Referring to the merging of the Wurruk brigade with Sale’s Mr Ryan said he thought the new residential developments being encouraged by the upgrade of the Sale Causeway and Princes Highway past Wurruk would provide recruitment potential.

“I would encourage anyone living in the area, who is able to dedicate their time to becoming one of Victoria’s 58,000 CFA volunteers, to consider joining the Wurruk fire brigade,” he said.

“The people of Gippsland are known for being community minded, and over the next few months the Sale brigade will be actively seeking their help in protecting the Wurruk community.”