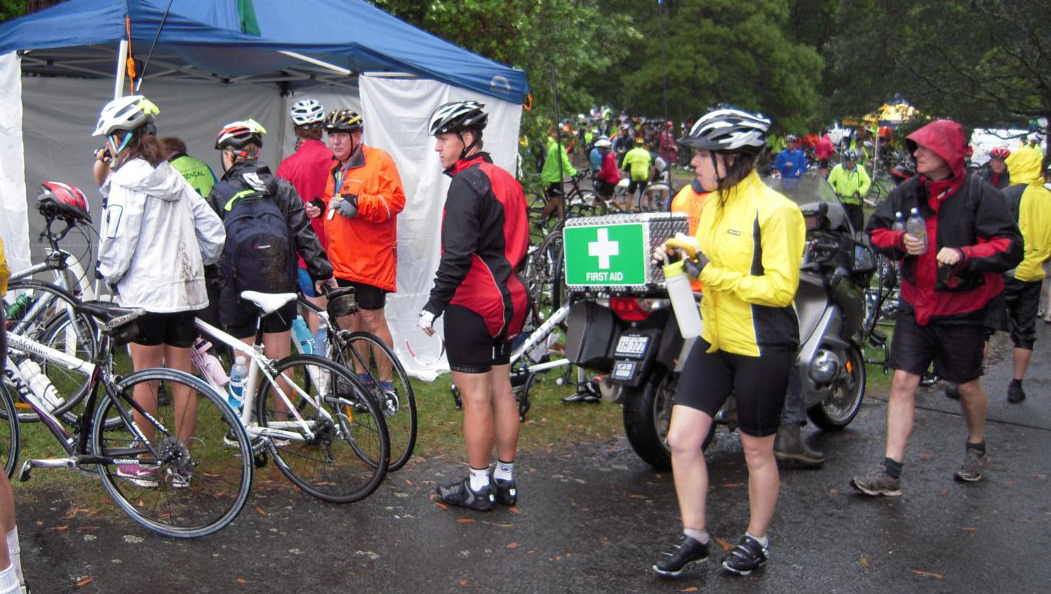 Another was reportedly taken to hospital with a minor back injury.

Hundreds of riders, predominantly school students, were caught without wet weather clothing in heavy rain and became exhausted on the 25 kilometre, 650 metre ascent of Powers Hill to Willung South and Carrajung.

A number of riders began to show serious signs of distress riding in the rain on the Grand Ridge Rd to Tarra Bulga National Park at Balook and many were taken by car or ambulance to Balook.

Balook Guest House and Lyrebird Cafe proprietor Nicolene Harvey described the events of the day as being like the hospital scenes from the film Gone With The Wind.

“The mist and rain came in about 6.30am and it got steadily colder, then about 10am the first car stopped with two semi-conscious kids, and then they just kept coming.”

Ms Harvey and partner Steve Ronaldson turned on every heater in their premises and attempted to make the more than 200 young riders comfortable with hot chocolate and coffee.

Ms Harvey said the ambulance officers who dealt with the worst cases were grateful the guest house and cafe was open and able to provide refuge for the chilled riders.

Event manager Darren Allan of Bicycle Network Victoria said about 300 riders were eventually taken to Traralgon by bus rather than risk hypothermia on the steep and winding descent to Tralagon.

However Mr Allan denied the 17 riders were hypothermic, saying they were conveyed to hospital simply as a precaution on the recommendations of Ambulance Victoria.

Mr Allan said the rest day came as perfect timing after the challenging leg from Rosedale.