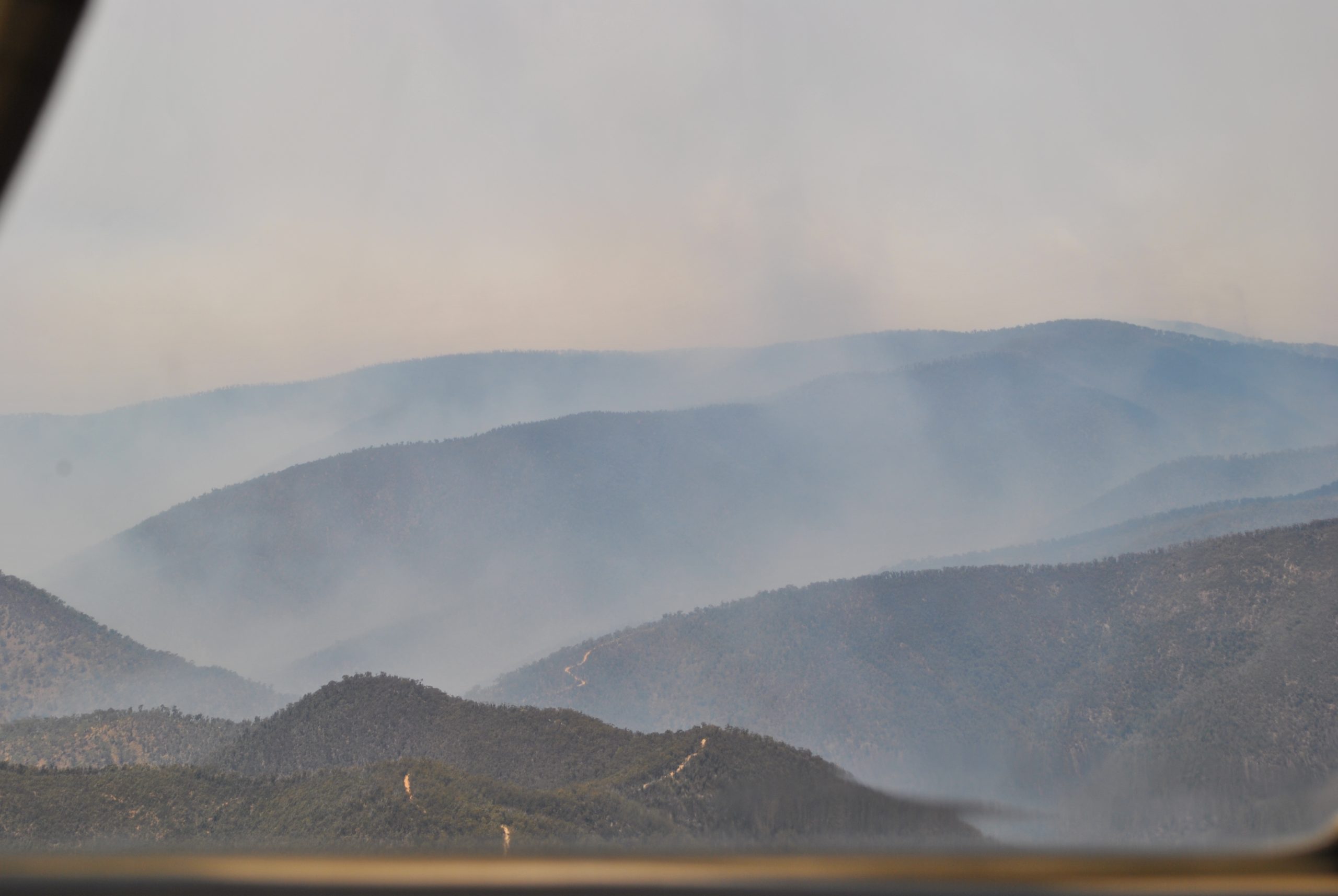 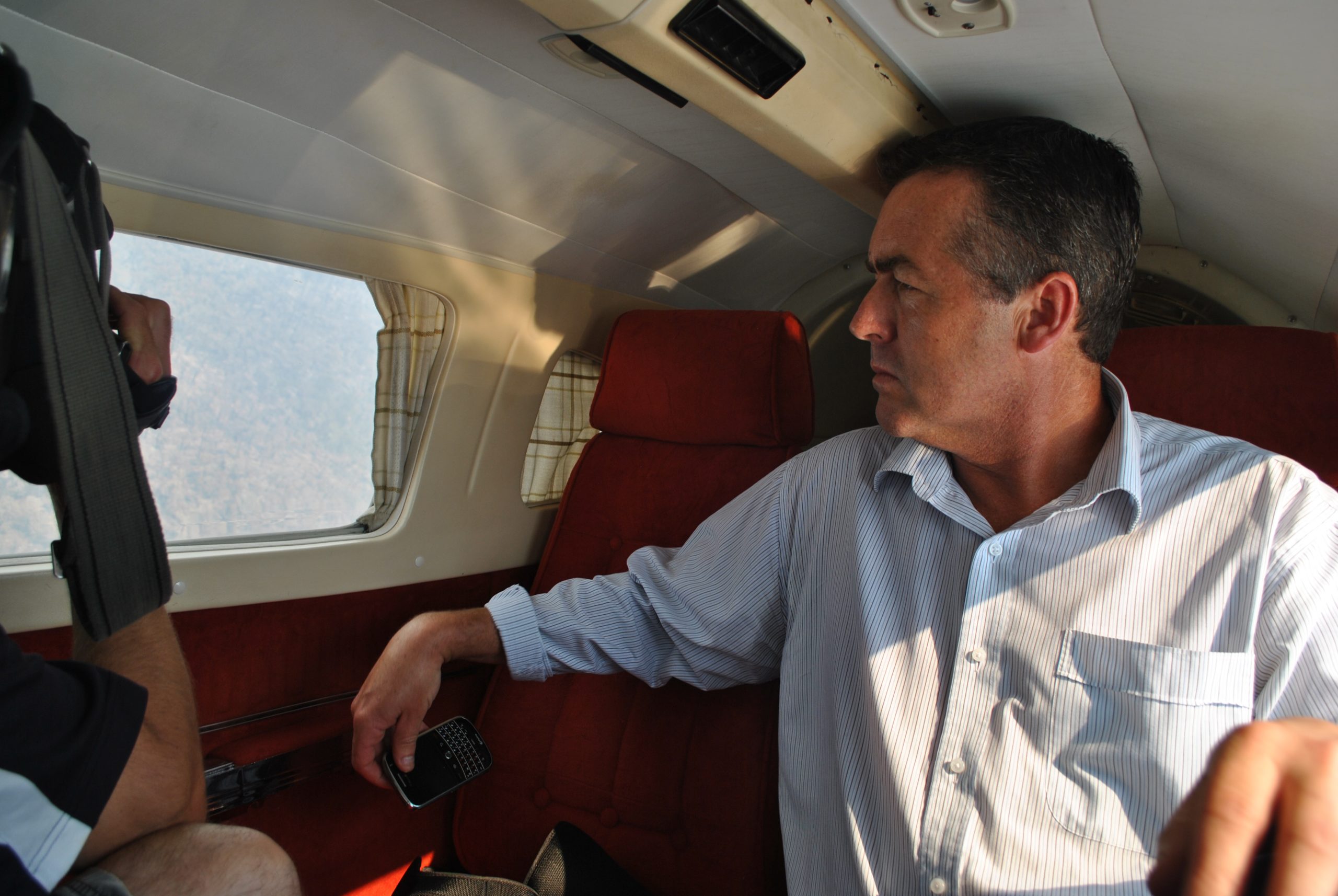 LOOKING out the window of a Piper Seneca 111 aircraft, the impact of last Friday’s bushfire is hard to escape.

Clumps of blackened trees leap out in rugged bushland too thick and uneven for fire trucks to access.

In the open, tree trunks, stand brunt free of leaves and branches and fallen houses look like broken pieces of Lego trampled over by a toddler playing Godzilla.

Patches of severely singed grass lie next to grass so brown and moisture-less that the heat of the coming weeks would be enough for it ignite, even without the fire swinging back around.

With people still held back by road block, there are few cars on the roads, making the view all the more desolate. That it, of course, if you can see anything.

Even at 20,000 feet, the smoke is so thick in places it is impossible to see.

According to Mr Chester, the scale of Friday’s bushfire is best appreciated from the air.

Surveying the damage with a furrowed brow, he said this fire was unlike any the state has had in recent years, as, unlike other fires that had ripped through the community, last Friday’s bushfire threat wasn’t over.

Because the threat of fire was due to return later this week, Mr Chester said people couldn’t begin to think about, and take steps towards, the recovery process while the threat was still looming.

“It’s going to be a big challenge her for the next couple of months,” he said.

Mr Chester spent the afternoon on the ground, helping, and talking to, people in fire affected towns such as Heyfield and Seaton. He said many people didn’t know how to get in touch with basic services, which made informing them his primary responsibility.

Mr Chester said it was important to help people get on with their lives. He said he wanted to ensure people could access their properties to help recover stock, rebuild fences and provide animals with feed.

“The tragedy is we’ve lost one life in these fires, and the absolute focus in the next couple of weeks is to make sure we don’t lose any more lives, human life is absolutely our number one factor in all of this,” he said.

Mr Chester said the issue of road blocks was a very difficult balancing act for the authorities.

“The number one priority has got to be human life so they are doing the best they can to keep people safe,” he said.

Mr Chester said the authorities were working as hard as they could to grant access to people wanting to check on their property and stock.

Cr Rossetti said council was working hard with the local community to inform them of issues they may face in the recovery phase.

“We’ve got a recovery line set up, accessible on the Wellington Shire website, people can call,” he said.

Cr Rossetti said the recovery line was there so people could ask questions or make requests about placing signs on the road about wandering stock, where to get fresh water, or where they could find emergency accommodation once the relief centres had closed down.

The relief centre reopened at Gippsland Regional Sport Complex on Thursday, in the wake of the returning fire threat.

“It’s amazing to see all of the different agencies click into gear, not just the fireys, the SES, the Red Cross, even Save the Children Fund is coming up and entertaining the kids in some of those areas,” Cr Rossetti said.

“I think the main message to our communities that have been affected and impacted is you are not alone, there are a lot of services available, just sing out and ask, and if you know of anyone else who needs a hand, certainly, by all means, give us a call, let us know what needs to be done.”

Cr Rossetti said every community and every individual would have different needs, he said it was the council’s function was to put people in touch with the right agencies.

He said council would be running the primary contact role, case managing for individual, pulling in assistance from state government level agencies, such as the department of services.

He said one of the requests from the people at Seaton was to get skip bins placed in the town so people could through away soiled food items they left in their fridges when they headed to the relief centres.

Cr Rossetti said keeping response at council level was a way of allowing the community to participate in the recovery, a way of letting people look out for their neighbours.

The mayor said he was amazed by the resilience of the community.He said he had talked to people who had lost everything that kept reiterating how lucky they were.

“It’s really inspirational to be around just to see the amazing spirit of those communities,” he said.

With smoke wafting over Maffra, the fire front about 16km away (on Monday) and a ring of fire around Licola things don’t look like letting up any time soon.

With no heavy showers forecast in the immediate future, Mr Chester said it could be a long wait for Gippslanders near the fire front.Anyone wanting to volunteer their services to the recovery effort is asked to register via volunteer.vic.gov.au and click on emergency.

To view a gallery of photos of the bushfires from the air, click here.