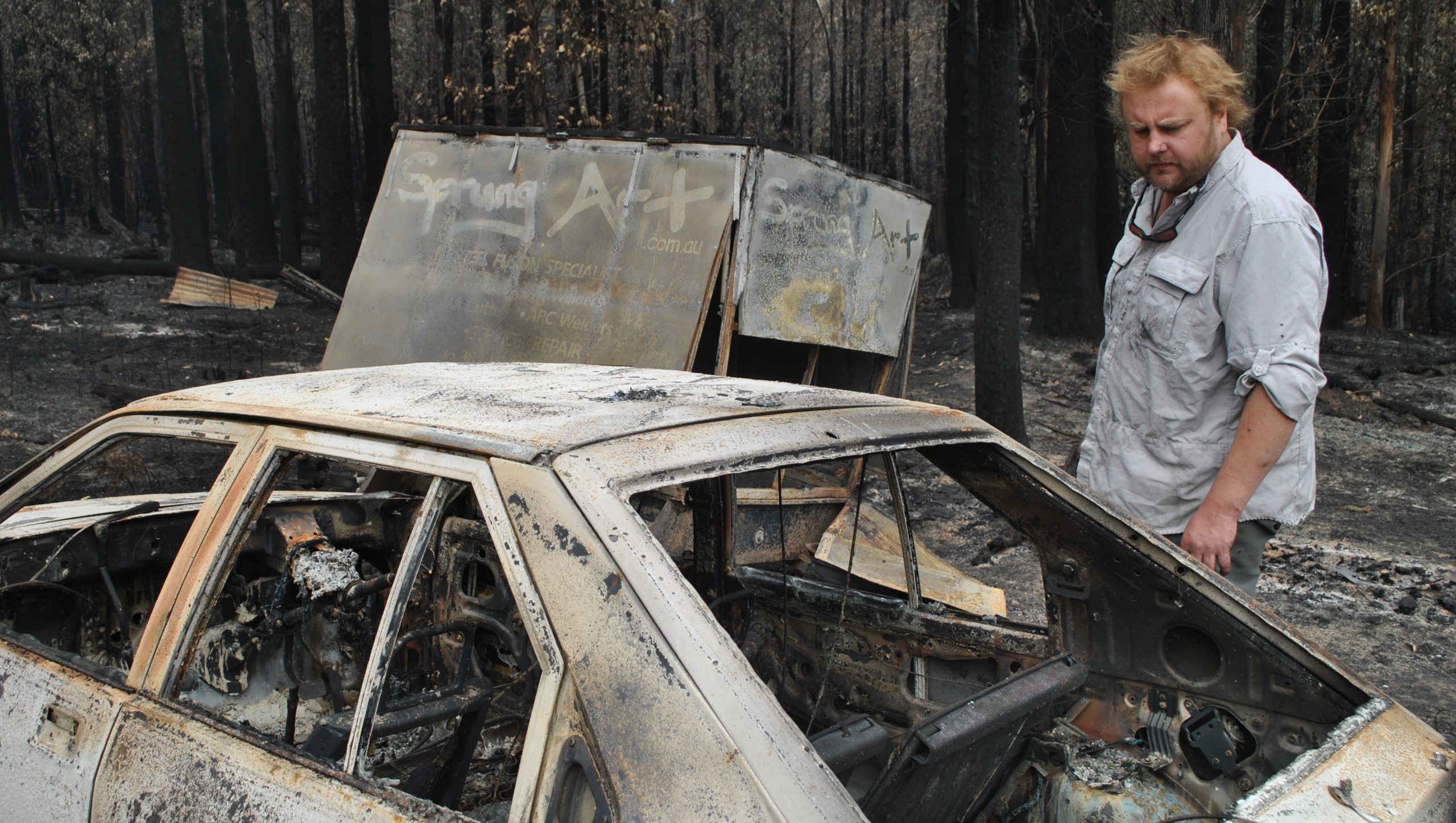 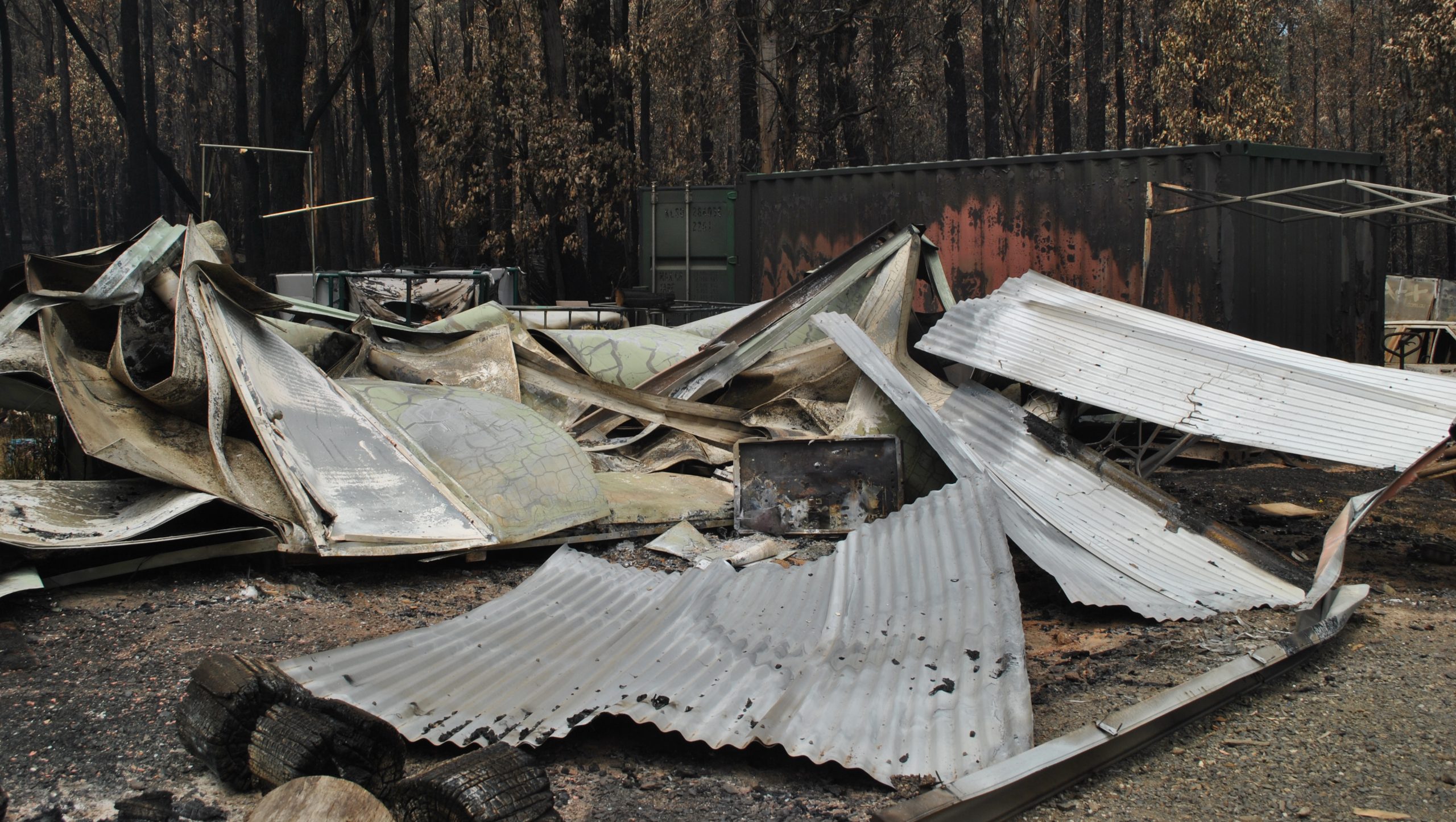 RESIDENTS and property owners in the Seaton, Dawson and Glenmaggie areas have been forced to pick up the pieces this week following the Aberfeldy-Donnelly’s bushfire, and none more so than Rob Martin who lost everything in the fatal blaze.

Mr Martin, who owns a remote property north of Seaton, said he was devastated when he returned to his property three days after the fire to find it destroyed.

“I have nowhere to go, mate I lost everything,” he said.

“I’m 36 years old and the fire has taken absolutely everything I own, it has erased the 36 years of my life.

“It’s painful; usually I’m an independent guy and people ask me for help, so for me to be asking people for help sort of goes against the grain.

“I wake up every morning and I find it very difficult to carry on.

“The only time I felt like this was when I lost my mum when I was 10.”

To add insult to injury, Mr Martin not only lost his home, but his entire container of stock for his online business. Following the economic downturn, Mr Martin re-invented his business to solely an online presence, and relocated to the area as a means to cut the costs of having to pay rent in Melbourne.

“That’s the nature of my work, I would drive down (to town) two times a week,” Mr Martin said.

“Three years ago my business was going great guns but (with the economic downturn) financial circumstances forced me to relocate; it got to a point where I couldn’t run my business from home anymore.

“I didn’t think I would get everything up here for it to all burn, I didn’t even last one summer.

“My problem is I can’t replace my stock, there is nothing left in the container and there are no jobs around Heyfield.

Mr Martin said he had very little time to prepare his property for the blaze that would wipe out his property, with only enough time to relocate his wood pile.

“I only had a couple of hours notice,” he said.

“When I noticed smoke, I drove the 12km up the road to the fire tower and got told I should be okay, but six kilometres down the road on the way back I got a phone call saying ‘Rob, get out of there’.”

Now homeless, Mr Martin said he had been living out of his vehicle in order to make the $1680 in emergency accommodation grants last.

“I got onto the DHS people for emergency housing and they were going to give me a caravan, which the ranger at the caravan park at Lake Glenmaggie was going to let me put there for free.

“But then I got told there was no more money (to give).

“I’m pretty sure I’m eligible for a $25,000 grant, but the problem is I have to replace my portable site shed, for which you’re looking at $20,000, and my containers which would be $4000 each and I’ve been told I probably won’t see that money for months.

“I had a pretty good set-up out here, there was so much work.

“It took me a bit of work each day, or every couple of days to get it up to what it was like before the fire hit.”

Mr Martin said he would appreciate the use of a portable site shed or caravan while he again found his feet.

“Even just a caravan that I could put somewhere,” he said.