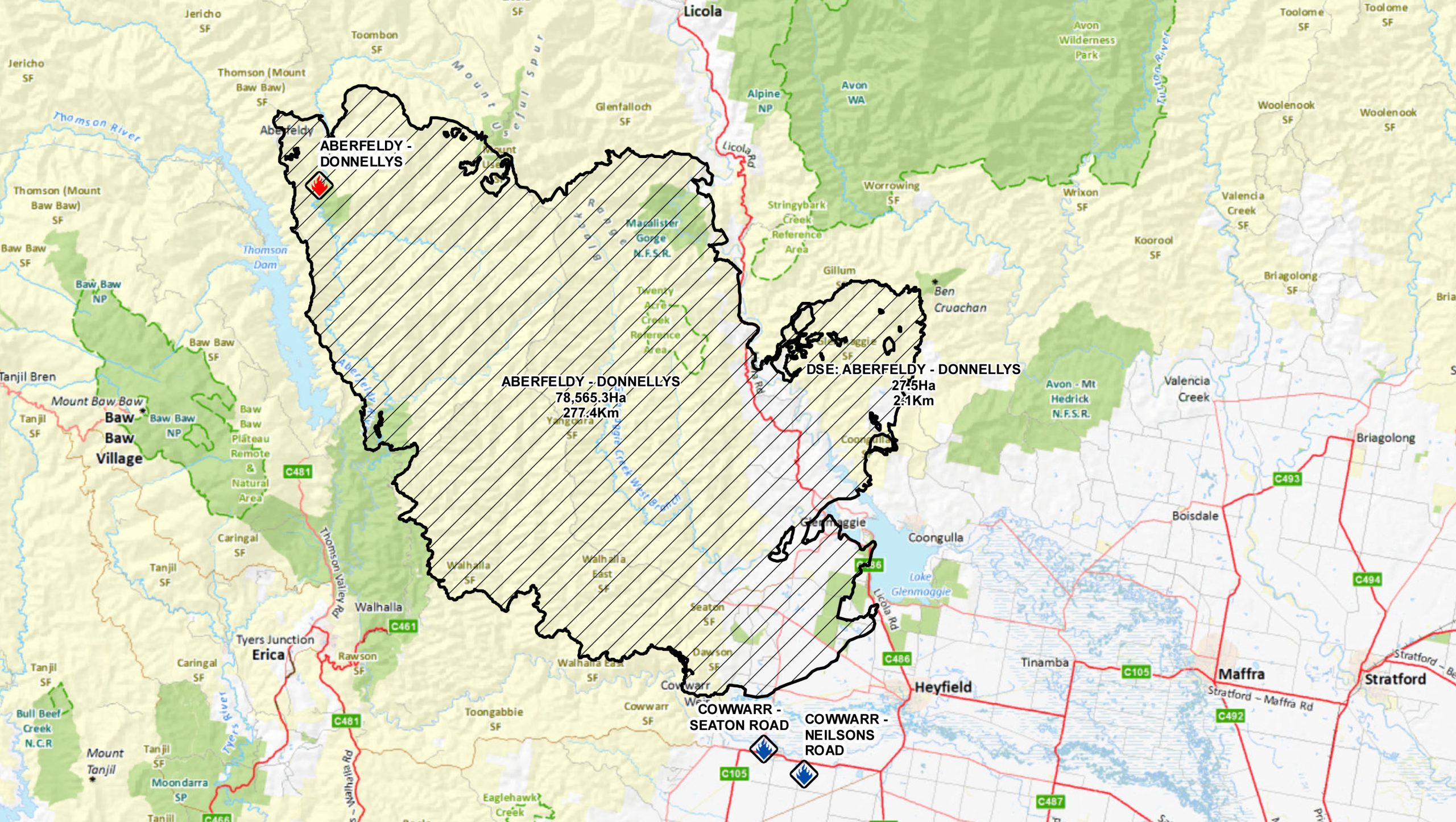 FIRE crews were able to prevent damage to properties south of Licola.

The focus for crews fighting the Aberfeldy-Donnellys fire will be on asset protection.

The fire is now 78,563 hectares in size, stretching from Aberfeldy, north-east of the Thomson Dam, to areas of public and private land north and west of Heyfield.

Much of the area is burned through, but with little or not active fire. The main firefront is still in the northern sector, in remote country just west of Glenfalloch Station, 10 kilometres south of Licola.

DSE incident controller Peter West said the fire came close to these properties yesterday, but did not cause any damage.

“Everyone was well-prepared on their properties and with assistance from DSE and CFA crews, that threat was averted,” he said.

The Aberfeldy-Donnellys fire spotted over control lines on the northern edge, west of Glenfalloch Station yesterday, developing rapidly in the hot, dry conditions and creating a smoke plume visible for many kilometres.

The Wollangarra Outdoor Education Camp was under threat and the fire also came close to private property at Glenfalloch Station.

DSE and CFA strike teams helped staff at the camp to defend the property.

Crews attacked the fire aggressively from the air yesterday as the remote country it’s burning in was not accessible by ground crews. Machinery and ground crews constructed control lines to the east of the fire, west of the Licola Rd.

Ash and burnt leaves from this fire were carried a long way to the south-east and the smoke also affected communities over a great distance.

There will be more than 180 DSE, Parks Victoria and CFA personnel working on this fire today, supported by 17 tankers, 29 slip-on units, 14 dozers and eight aircraft.

While fire activity had subsided overnight, residents should stay vigilant for changing conditions as temperatures rise.

The Heyfield-Licola Rd is cloased at the junction with Kellehers Rd, Glenmaggie, except for authorised access. Access is possible from Licola to Heyfield.

Smoke will be visible from a considerable distance.

There have been some smoke reports on other areas of the fire, but they have been within existing control lines.

DSE crews continue to patrol and blackout other areas of the fire.

The focus today will be on asset protection, particularly in the Glenfalloch and Licola area.

“Other parts of the fire area will continue to be patrolled and blacked out. There are still some areas where smoke will be seen, but this is well within control lines,” Mr West said.

Mr West said residents in all areas in and around the fire area should stay aware of conditions.

Residents have been advised to check their bushfire survival plan. Those without a plan are to decide what they would do if the situation changed.

People experiencing any symptoms which may be due to smoke exposure are to seek medical advice or phone Nurse on Call on 1300 606 024.