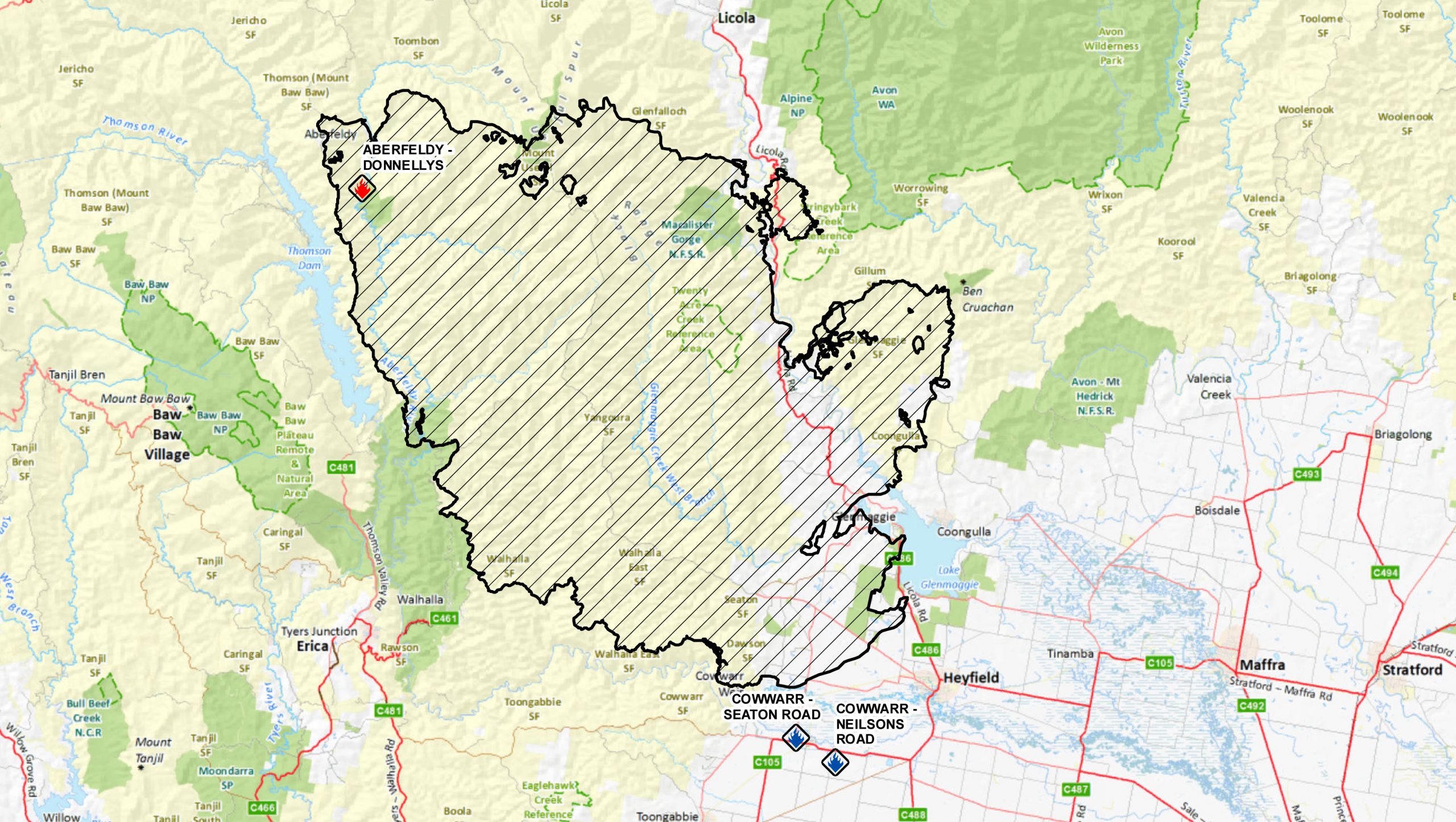 THE Aberfeldy-Donnellys fire has burned through 82,820 hectares from Aberfeldy, north-east of the Thomson Dam, to areas of public and private land between Heyfield and Licola.

The bushfire, which has been going for 25 days, is being controlled.

Currently there are 270 personnel, two tankers, 52 slip-ons, 14 dozers and six aircraft deployed to fight the fire.

DSE incident controller Dennis Matthews said the main fire activity is still to the south and west of Licola, in the Glenfalloch and Mount Useful areas.

“The situation hasn’t changed much overnight and the current mild weather conditions are helping us with our fire suppression efforts,” he said.

“The focus is on attempting to halt the eastern spread of the fire and protecting private property in the Licola, Glenfalloch and Glencairn areas.”

Residents of Licola and surrounds, including Glenfalloch, Glencairn and Wollangarra may see active fire and considerable smoke.

Crews are patrolling on the south end of South Rd, near Mt Useful, where back burning operations have been undertaken and where the fire remains active.

Much of the remaining fireground is quiet and patrols continue to monitor, black-out and mop up the fire.

In areas the countryside is steep and rocky, making it difficult for firefighters to access the fire.

The Heyfield-Licola-Jamieson Rd is closed from the junction with Kellehers Rd through to Jamieson and only essential and emergency services vehicles are allowed to pass. Local road users in the area should proceed with caution and watch out for firefighting vehicles, personnel and machinery.

“Fire activity is very quiet in all other areas, where patrol and blacking out operations will continue,” Mr Matthews said.

Significant areas of forest and parks in Gippsland are closed due to fire activity.

Visitors should avoid the fire-affected areas and plan to go to other parts of the region that are safe to travel to.

Residents of Licola and surrounds may see active fire and there will be considerable smoke.

Other works include control lines being constructed on the Mt Margaret Track in an attempt to halt the easterly spread of the fire.

Crews are patrolling on the south end of South Rd, near Mt Useful where back burning operations have been undertaken, and also around Glenfalloch and the remainder of the fireground perimeter which is quiet.

CFA and DSE crews will remain present in Licola over the coming days.

The Heyfield-Licola-Jamieson Road is closed from the junction with Kellehers Rd through to Jamieson, allowing only essential and emergency services vehicles to pass. Local road users in the area should proceed with caution and watch out for firefighting vehicles, personnel and machinery.

Residents in Licola and the Glenfalloch area should remain vigilant.

People have been urged to check their bushfire survival plan. Those without a plan need to decide what they would do if the situation changed.

People experiencing any symptoms which may be due to smoke exposure are to seek medical advice or phone  Nurse on Call on  1300 606 024.