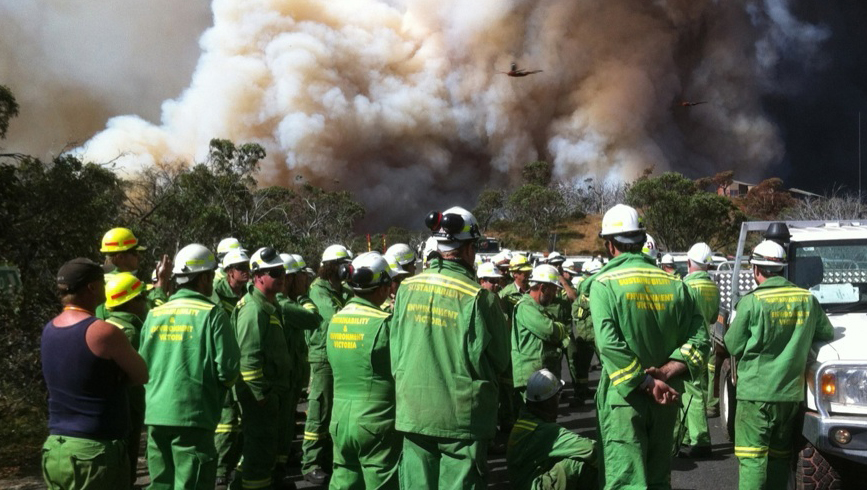 Police are investigating the circumstances surrounding the death of a man and a woman near Pheasant Creek about 3.35pm on Wednesday.

Victoria Police investigators believe the colleagues were in their emergency vehicle when it was struck by a falling tree.

Emergency services attempted to get to the duo but because of fire and difficult conditions in the immediate area were unable to.

Crews reached the scene around 8.10pm.

The deceased firefighters have been named as Katie Peters, 19, from Tallandoon, and Steven Kadar, 34, from Corryong.

Ms Peters has been with the DSE for two seasons as a project fire fighter, joining DSE as her first paid job.

She had taken a year off after year 12, travelling widely overseas.

Ms Peters loved animals and was planning to be a vet.

She was always prepared to have a go and was the first one to put her hand up to drive a tanker or use the chainsaw. She made time for everyone and loved working with her colleagues and was incredibly down-to earth.

As part of a feature on female fire-fighters recently, Ms Peters spoke of how much she enjoyed the previous season, with one of the highlights attending a bushfire in remote terrain at King’s Spur, south east of Dartmouth Dam.

Mr Kadar was a highly valued and experienced firefighter and very much respected by his colleagues. He began with DSE as a project firefighter in 2004, later taking on a role as a full time field services officer.

DSE is assisting Victoria Police with their investigation and supporting staff.

Police have notified the Coroner and WorkSafe of the deaths.

“This is devastating news and the loss of staff is a tragedy under any circumstances. Even one death is not acceptable,” he said.

“I would like to personally extend my sympathies and DSE’s sympathies to their families and friends.”

“Our continuing focus is on the safety and wellbeing of our staff, our agency partners – CFA, Parks Victoria and DPI – and interstate and international colleagues (New South Wales and NZ) who are assisting us to fight fires across the state.”

Support is being offered to his DSE colleagues and senior DSE staff are in Harrietville to provide support and counselling for the crews.

Premier Ted Baillieu said his thoughts and the thoughts of all Victorians were with the deceased firefighters’ families and loved ones at this time.

“Throughout this summer Victorian firefighters have been protecting our communities,” he said.

“Our thoughts extend to all agencies that have been engaged in this effort.

“The tragic loss of these two firefighters will affect all those who have been fighting these fires and protecting Victorian communities.”

Victorian flags were at half-mast yesterday as a mark of respect.

The Australian Workers’ Union state secretary Cesar Melhem said the loss of the two firefighters was a shattering one for the families of those who perished, for their workmates, for their communities, for the union, and for all Victorians.

“These DSE firefighters work in the most horrific conditions imaginable, away from the big centres, out in the bush, and with very little recognition for their heroic contribution to this state,” he said.

“They have died heroes, which will be small comfort to those that grieve them.”