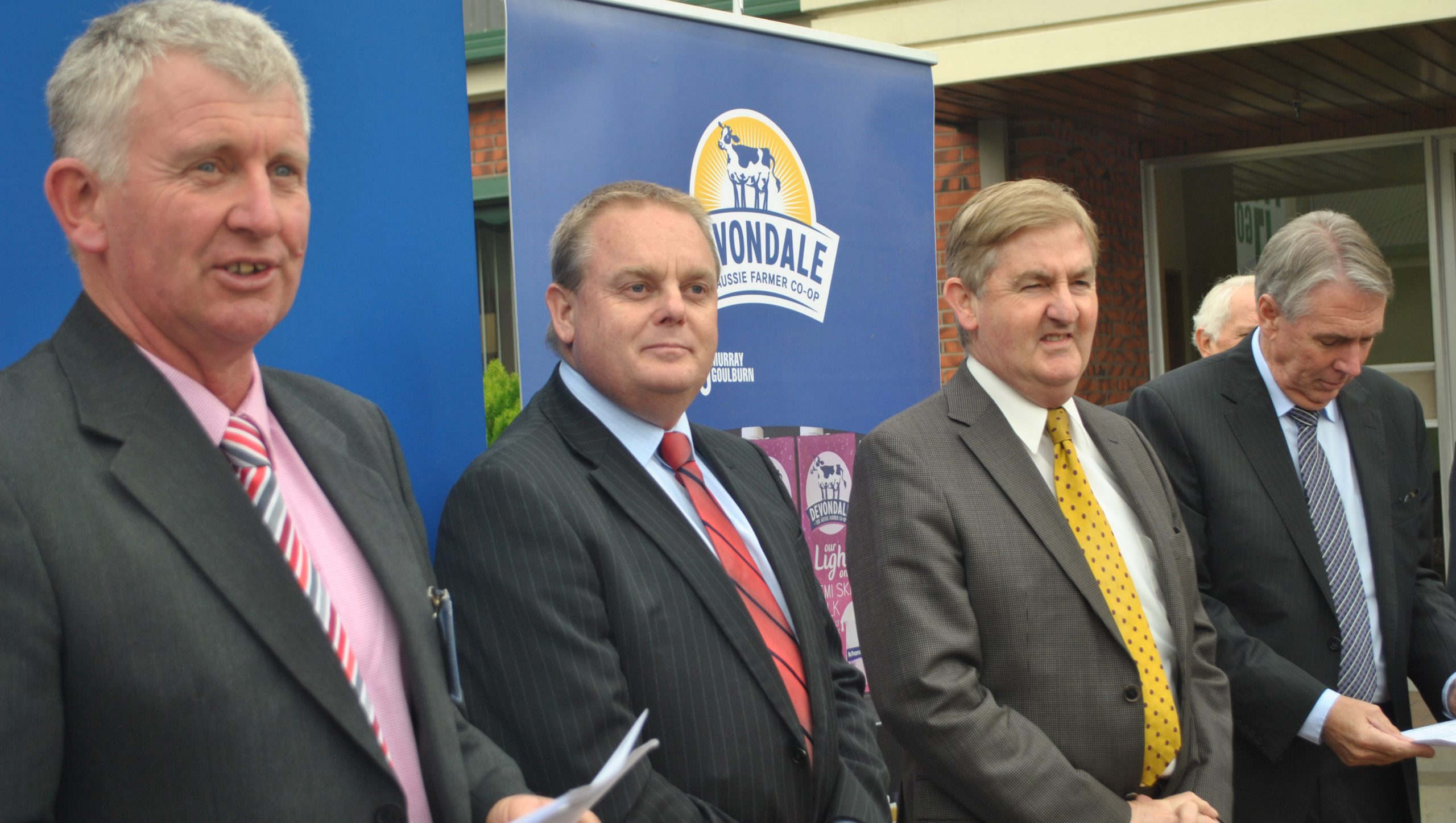 MODERNISATION of the Macalister Irrigation District will be kick started with the state government announcing $16 million for upgrades at Murray Goulburn in Maffra on Wednesday.

Deputy Premier Peter Ryan said the state government would provide $16 million towards upgrading the MID over the next three years, with a co-contribution of $16 million from irrigators.

The funding is in addition to the $6.4 million irrigators had already spent on an early works program which was set to provide an extra 2,200ML of water savings.

“Through the work that Southern Rural Water has done in concert with the government, they have a different stage of advance propositions which would deal with this capacity to be able to deliver the water more efficiently throughout the system,” Mr Ryan said.

“SRW itself has embarked on a $6 million investment which will yield about 2200 ML of water, but SRW on behalf of the producers in this region has been coming to government over a period of years now to see if there could be a government involvement in being able to assist them in that work.

“We as a government are intent on doing what we can in the scope of our current financial constraints to begin the process with SRW of even better mechanisms of delivering a more efficient system throughout the MID.”

Mr Ryan said the modernisation would increase the amount of food this region produced, boosting the local and state economy.

He said the initial phase would return 12,300 megalitres of water a year to productive use, with Murray Goulburn estimating the additional water could increase milk production from the Macalister region by an extra 24 million litres a year.

The MID produces about 400 million litres of milk annually.

“The systems we have got here at the moment were developed through the 1920s and then through the 50s,” Mr Ryan said.

“We’ve got about roughly 650kms of delivery channels and about 500kms of drainage area but the reality is that we only have about a 75 per cent efficiency in the delivery system throughout the Macalister Irrigation District.

“It does make it one of the lowest efficiency figures across the Australian nation in fact and we do need to do more to bring up that level of efficient delivery of our water.”

He said the modernisation would provide irrigators with reliable and secure water supplies to help increase production and meet the state government’s ambitious target to double the value of Victoria’s food and fibre production by 2030.

“The district’s gravity-fed system irrigation system is now 60 to 90 years old and contains 410 miles of supply channels and 305 miles of drainage channels, much of which is manually operated,” Mr Walsh said.

“The initial phase, funded jointly between the Coalition government and irrigators, will improve the speed and reliability of water to deliver to farms, boost agricultural output through greater on-farm efficiency and improve waterway and estuarine health by reducing outflows.”

Mr Walsh said with the first phase of the project now secured, state government would negotiate with the Commonwealth for funding to help build the Southern Tinamba balancing storage and pipeline.

“The pipeline will result in a further 13,500 ML of water savings that will then be available for irrigators, increasing the productivity of the district.”

SRW manager water supply east Terry Clapham said the initial phase of the project would take the MID into the next process of development in improving the premium irrigation district of Victoria.

“Certainly the irrigators are passionate about being as efficient as they possibly can and the best farmers and best users of water, in converting water into milk,” he said.

“I’m sure that the irrigators will step up and take up all of the advantages this development is going to do and improve what they already do very well.”

“As an ordinary irrigator who represents the customers, I am nearly as thrilled as Geelong winning another premiership,” he said.

“Seriously though, this has been an astronomical achievement by the government and it’s a short step on a long journey.”