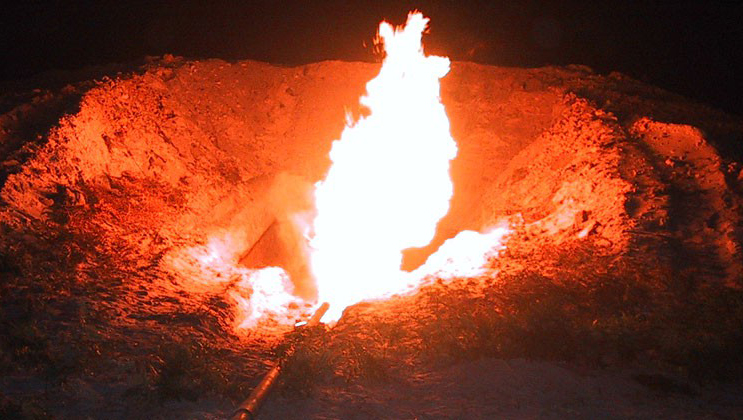 UNCONVENTIONAL oil and gas company Lakes Oil has fired its Wombat One well near Seaspray against the backdrop of increasing community concern about unconventional mining techniques such as fracking.

On Monday Lakes Oil advised adjacent landowners it would start testing at the Wombat one drill site the next day, Tuesday, May 14 through a letter box drop.

On Tuesday a group of adjoining property owners and CSG protesters gathered at the site to voice their concerns while the well was flared.

Lakes Oil chairman Rob Annells explained the 10-day test of the well, drilled more than 10 years ago, was undertaken for a number of reasons.

“Evidence from the United States suggests wells that were fractured and left for a number of years flowed better than those tapped immediately so we wanted to see if that was the case at Wombat one.

“Secondly we have sealed off the lower zones with cement and want to see if the top part of the Strzelecki formation flows better unfractured, and thirdly when we drilled 10 years ago gas prices were lower than today and we want to test the commercial possibilities of the well.”

The testing, which involves burning of the gas in a flare pit will be continued for the 10 days of the test.

“We have people on-site 24 hours a day and a fire tender, trailer with water tank in attendance,” Mr Annells said.

The testing was witnessed by a number of concerned locals, CSG Wellington Awareness Group and Friends of the Earth members.

Lakes Oil’s actions have prompted anti-Coal Seam Gas lobby groups and Friends of the Earth to call on the State Government to broaden and extend its fracking moratorium to include all unconventional gas mining and extraction.

Friends of the Earth coordinator Cam Walker said to test the well so soon after last Saturday’s meeting of close to 200 people in Seaspray Hall was indefensible.

“After such a strong message of concern from the community, it is appalling that Lakes would still continue with their preparations to recommence drilling at their Wombat site” he said.

“It shows contempt for legitimate community concerns about the impacts of unconventional gas operations.”

“Lakes Oil have defended their planned re-fracking in the Seaspray area by saying it is for Tight Gas, not CSG. However, concerns about the process of hydraulic fracturing, use of chemicals, and potential contamination of aquifers remain.

“It is clear that all onshore unconventional gas operations will struggle to achieve social licence with the people of Gippsland.”