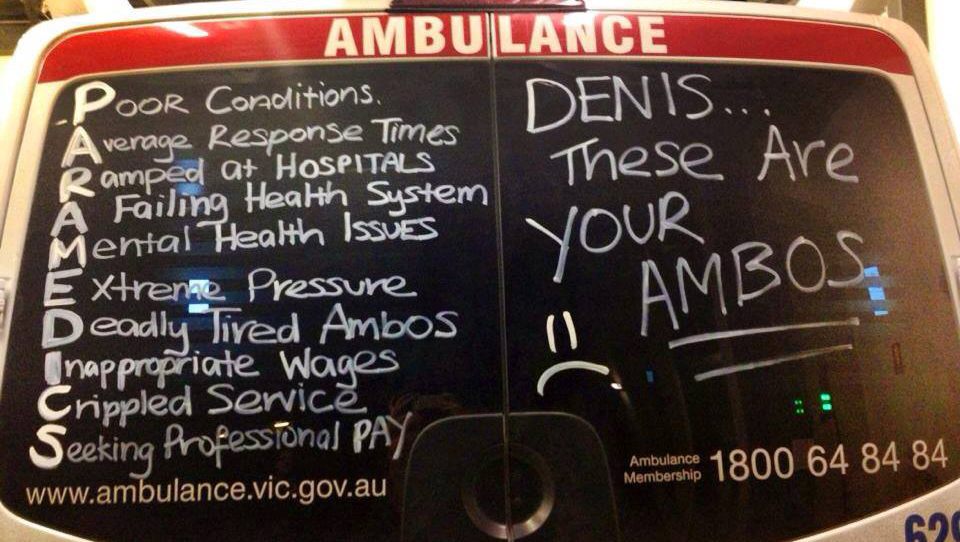 AMBULANCE Victoria’s local paramedics are calling for a show of community support this Friday when they rally at Victoria Park, Cunninghame St, Sale, from 10.45am.

The Ambulance Officers Association has called the rally and march to highlight its long running wage and conditions campaign and to call for improvements to the health care system.

Sale and Maffra AOA delegate Bernard Goss told the Gippsland Times the rally was needed to emphasise to Deputy Premier and Gippsland South MLA Peter Ryan the health system was in crisis and its flow-on effects added to the crisis in ambulance dispatch and response times.

“Things aren’t too bad at Sale (hospital) but ambulance ramping (waiting to deliver patients to emergency department) at Latrobe Regional Hospital has blown out,” he said.

Mr Goss said in 2010 ramping times were about 52 hours per month at LRH, but had now blown out to 198 hours a month — almost a four-fold increase.

He said that had significant implications locally, as Sale crews were sent to cover the Latrobe Valley, often leaving Sale with no cover.

“Sale’s response times are now 30 minutes on average; the bench mark should be 17 minutes,” he said.

Mr Goss claimed since the amalgamation of rural and metropolitan ambulance services in 2008, the situation had become worse.

He said the central dispatching of ambulances often took no account of travel distances, citing examples of Sale crews being dispatched to Moe because the Latrobe Valley ambulances were ramped at LRH.

While the government had actively recruited paramedics, the new recruits barely covered the numbers of paramedics leaving the Victorian service.

And the inexperienced paramedics needed to be supervised by a senior officer, meaning many shifts went unfilled.

“Paramedics are angry; the government politicians gave themselves a massive pay rise, with the lowest paid MP receiving a pay increase of $11,000 a year.

“The government has offered paramedics a 2.5 per cent pay increase in exchange for losing conditions, reduced annual leave and reduced sick leave.”

Mr Goss compared the base salary of Victorian paramedics, $56,000 before penalties and allowances, to the average wage of $68,219 and suggested Victoria was losing many paramedics to other states and private firms because of frustration over wages and a system in crisis.

“We want to ask Peter Ryan what he will do for his constituents in regards to people being able to rely on getting an ambulance in their hour of need,” he said.

As part of the union’s Code Red campaign those attending the rally are asked to dress in red.