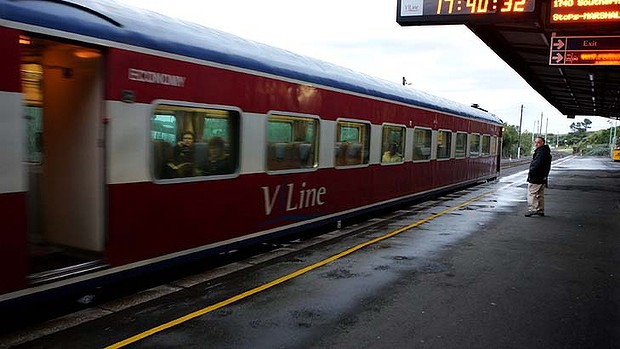 A POLITICAL war of words has erupted over passenger safety on Gippsland trains.

The state government is putting the safety of regional train passengers at risk because V/Line trains are breaching passenger safety load limits on every service line, according to Eastern Victoria MLC Matt Viney.

But a spokesman for Deputy Premier Peter Ryan responded by claiming the Labor MP had “no credibility” when it came to regional trains and passenger safety.

Mr Viney said the Gippsland line experienced 69 breaches where there were more passengers than seats during the period and on 23 occasions breached the load safety limit.

“These are serious safety breaches which put Gippsland passengers at risk of injury should an incident take place,” he said.

“The blame for this overcrowding sits squarely at the feet of the current Liberal-Nationals government, local MPs Gary Blackwood, Russell Northe, Tim Bull and Peter Ryan.

“When in opposition, these coalition MPs promised they would ‘fix the problems’, yet it took nearly two years for their government to order new trains which are unlikely to be in service before 2015 four years late.

“We have saturation overcrowding on the V/Line network where passengers are forced to stand in aisles, sit on floors and block doorways and the Napthine government’s mismanagement is to blame.

“With no train through to Bairnsdale at all at the moment, it appears the Napthine government just doesn’t care about Gippsland commuters and can’t be trusted to deliver basic public transport services, let alone fix the current problems it has created through bad management and poor policy decisions.”

Mr Viney said the daily commute would continue to worsen as the government prioritises the East-West road tunnel in Melbourne over rail improvements.

Mr Viney said since being elected the government had cut new capital infrastructure spending on public transport projects by more than $1 billion.

“Gippsland commuters have every right to be asking why they have been forced to pay significantly more for train travel under this government, yet services are constantly overcrowded, delayed or cancelled and are getting worse,” he said.

A spokesman for Gippsland South MLA and Deputy Premier Peter Ryan said Mr Viney had repeatedly called for V/Line to return train services between Traralgon and Bairnsdale before it was safe to do so, a proposal that would put passenger safety at significant risk.

“Between October and December 2012, V/Line operated 535 trains on the Bairnsdale line, with seats available for every passenger 96.8 per cent of the time.

“This meant there was only a one in 31 chance that passengers would have to stand and that was only for part of the trip, such as from Dandenong to Pakenham or Garfield, because many V/Line passengers join or alight at these stops.”

The spokesman for Mr Ryan said since the Liberal-Nationals coalition came into government at the end of 2010, it had worked with V/Line to fix Labor’s many failures.

“We have invested up to $8 million to install axle counter technology at all 32 level crossings east of Traralgon, which will ensure that when trains return to the track they do so permanently,” he said.

“A track grinding machine to carry out immediate remediation works has been sourced and trains will return to service by October this year.

“In the meantime, significant maintenance works are being carried out along the Gippsland line to provide the best possible service to Gippsland train travellers.”