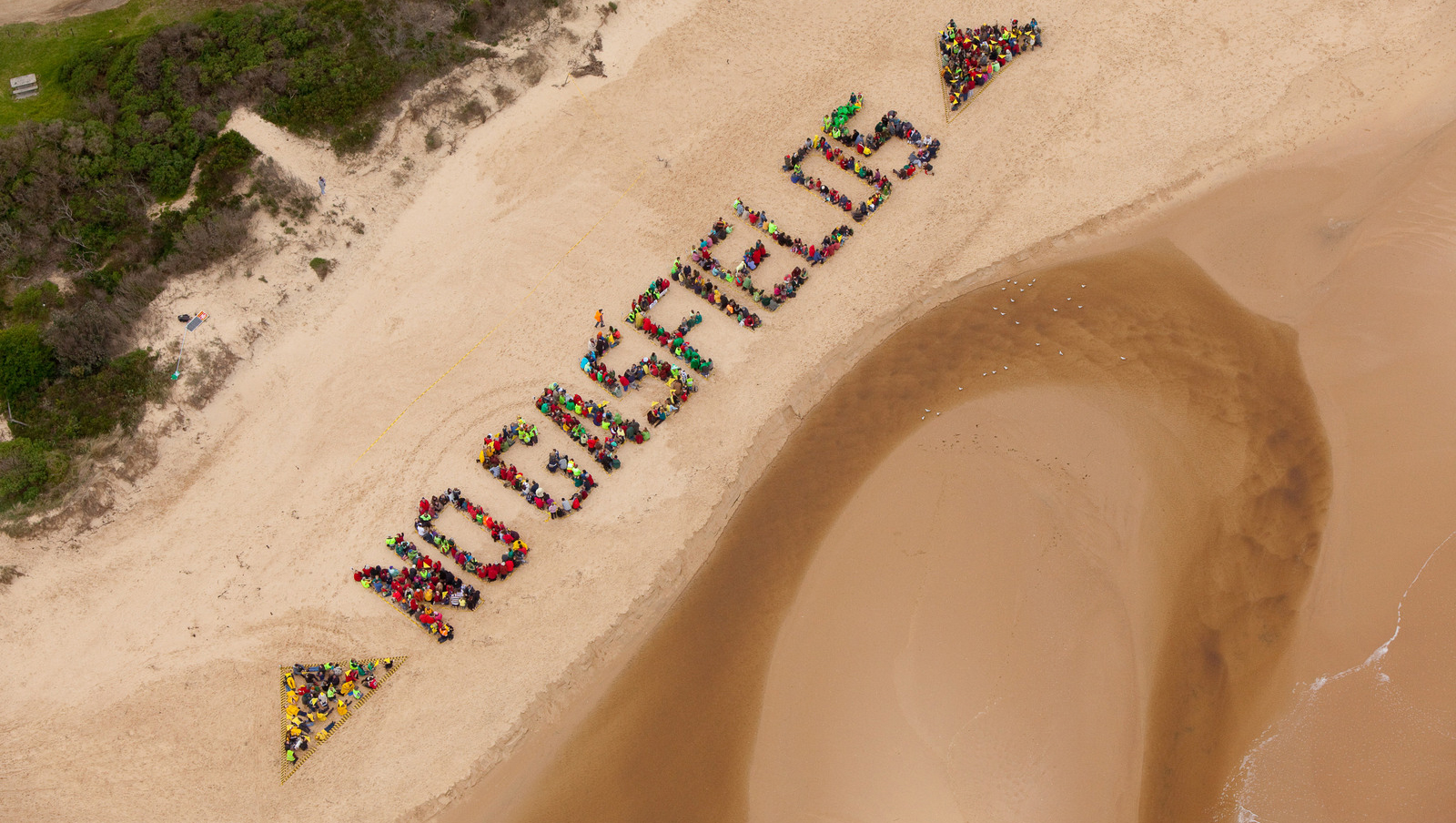 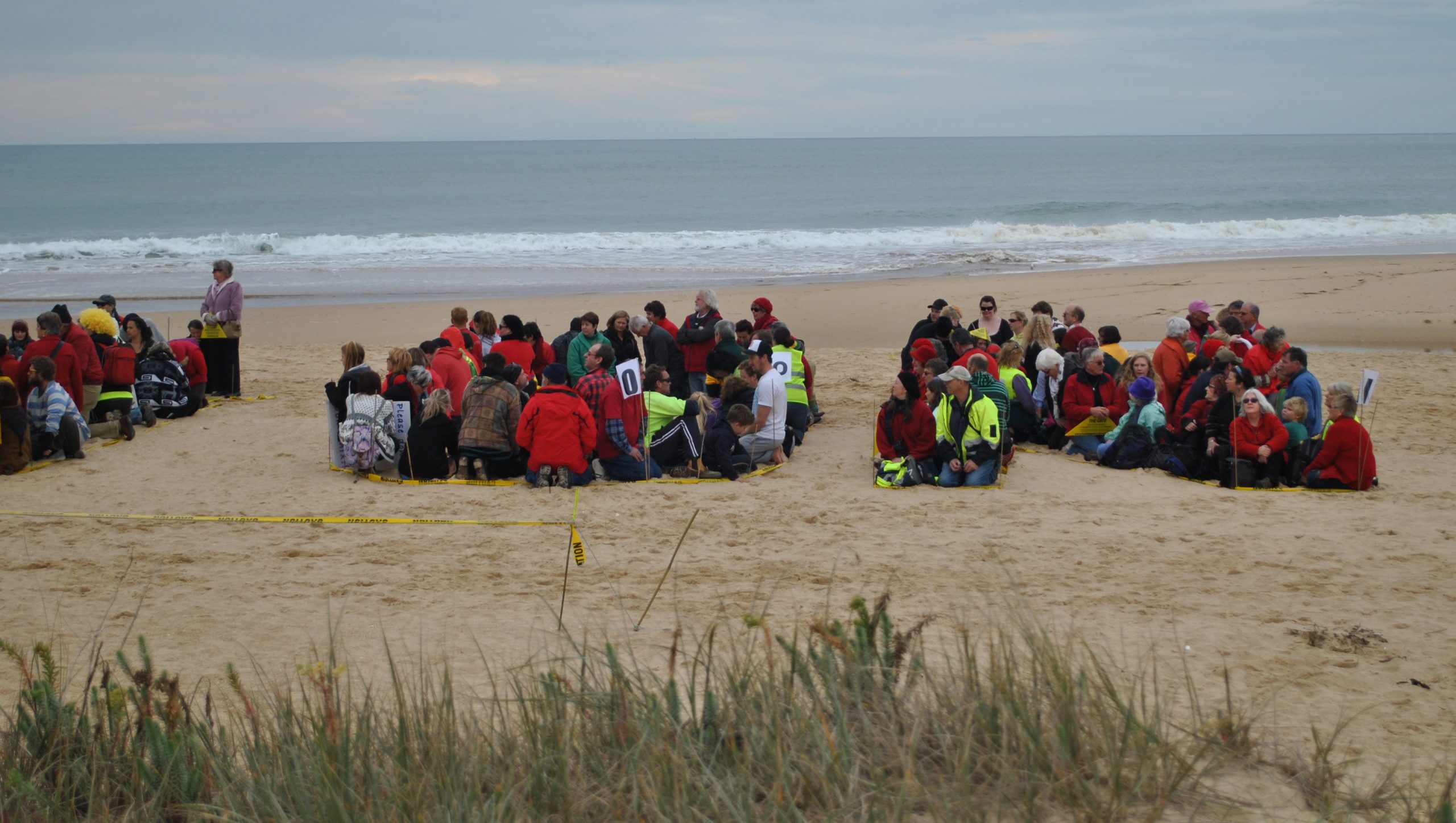 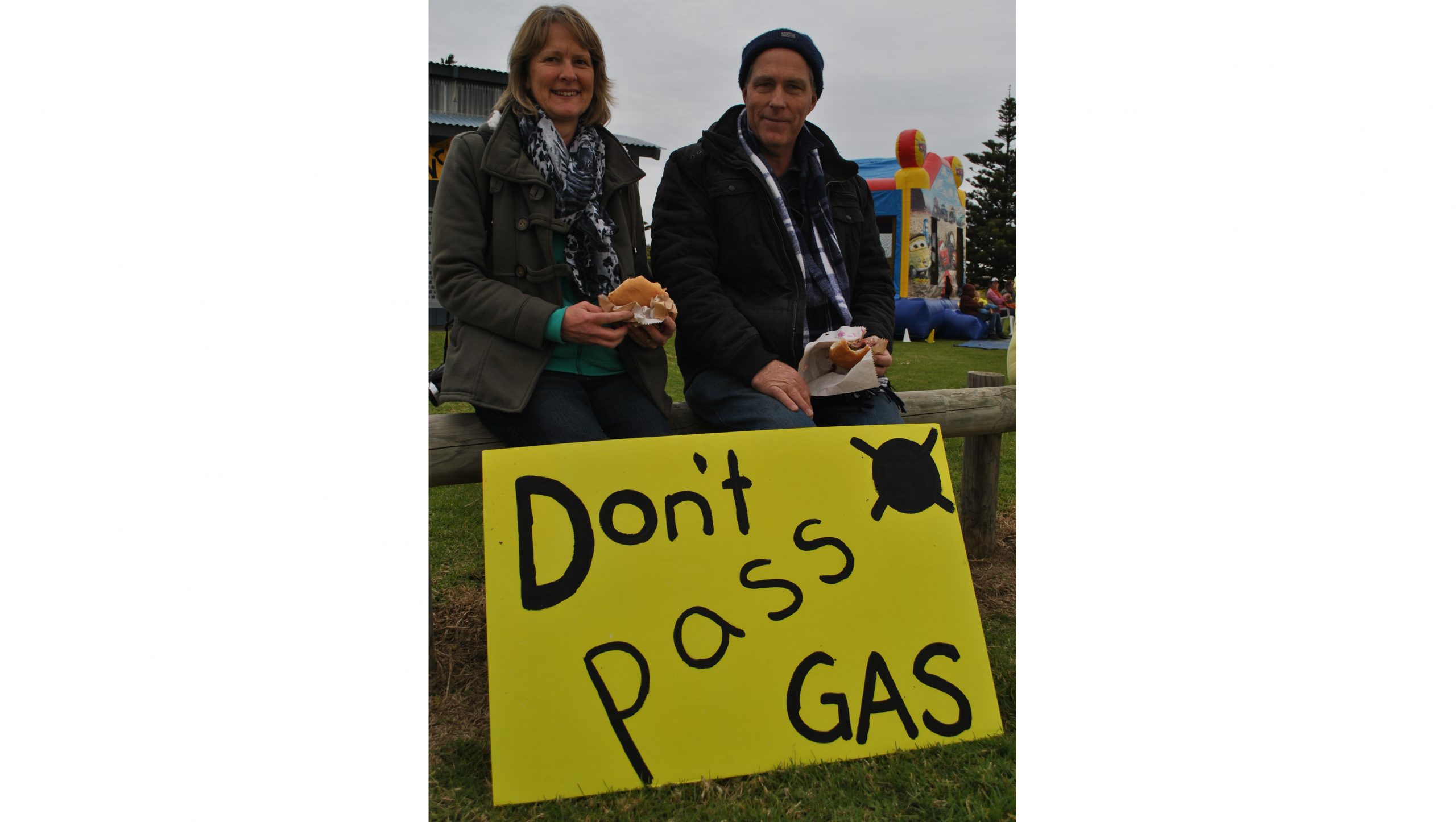 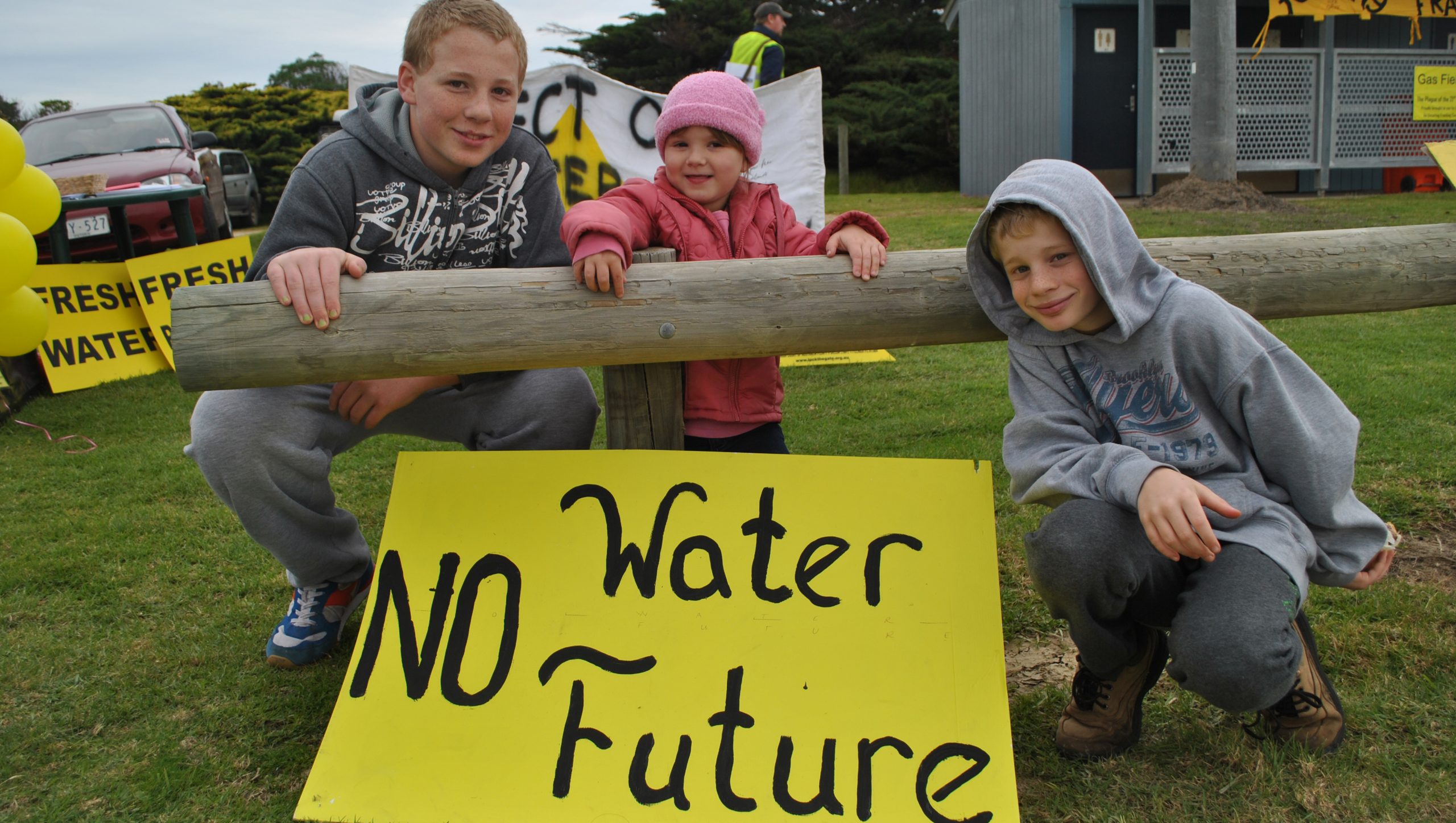 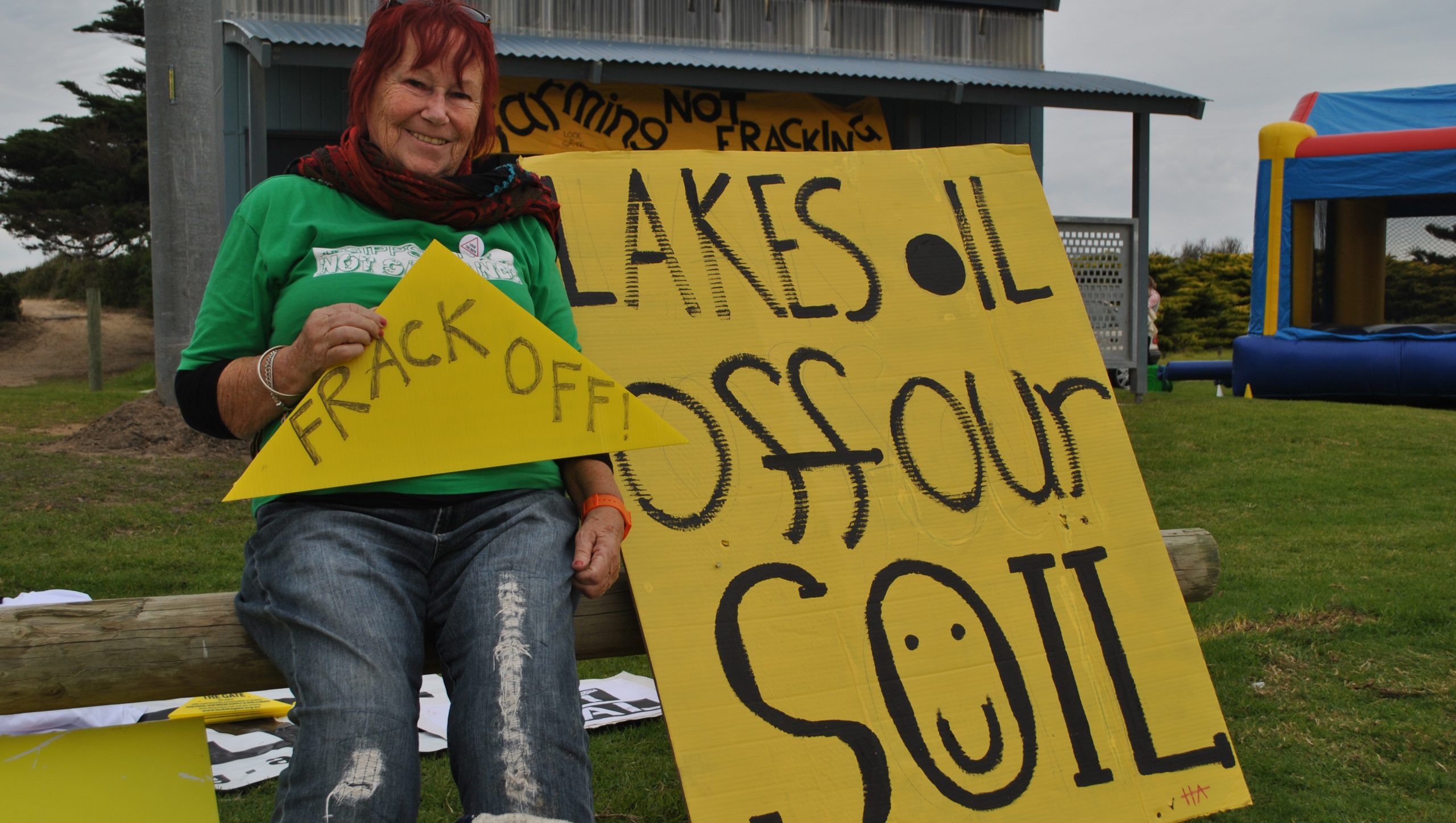 LIKE the fairy tale characters Hansel and Gretel following a trail of breadcrumbs, the journey to Seaspray Beach is marked by a run of Lock the Gate signs.

It seems almost every property from the Longford turn off has one of the distinctive yellow triangles on its gate or letterbox.

It is no surprise that 98 per cent of Seaspray residents surveyed by Seaspray CSG Free campaigners voted to declare Seaspray a CSG and tight “natural” gas free zone.

While the decision holds no legal bearing, many residents of the town are regarding the declaration as a win for local democracy and they hope the politicians are paying attention.

As part of a rally on Sunday to declare the town gas field free about 600 people from Seaspray and the Wellington shire, as well as many others from across the state, gathered on Seaspray’s beach to create a 70 metre human sign.

Lock the Gate founder Drew Hutton travelled from Queensland to act as a guest speaker.

“I’m overjoyed by the work that has been done in this community to warn people about the dangers of unconventional mining,” Mr Hutton said.

“We can’t succeed against these powerful multinational corporations without the support of the community.”

Mr Hutton said the concept of gas field free towns was a key part to the Lock the Gate strategy.

“The gas field free community movement now has really expanded through New South Wales and into Victoria,” Mr Hutton said adding it was no surprise Seaspray residents were among the first to sign on as, “Seaspray is likely to be the epicentre of the unconventional gas industry of Victoria.”

The survey was prompted by Lakes Oil gas exploration company’s recent use of its licences for the area to test previously fracked wells, however the government’s later moratorium has placed any unconventional gas mining activity in the area on pause.

Supporters of a gas field free Seaspray would like this moratorium extended until research can be conducted into health and environmental risks of mining practices such as fracking in the local area.

Darriman fine wool, beef, lamb and irrigated lucerne (fodder) farmer Libby Balderstone said “until they can prove it is safe to people’s health, to the environment, it is too hard to support.”

Ms Balderstone said introducing gas fields to the region could ruin the landscape and undermine the work done through organisations such as Landcare.

“(The ministry) is fairly focused on making mining development work in the state,” she said, describing the attitude as somewhat depressing for local producers.

“I feel the VFF needs to act strongly and support land owners in this complex issue,” Ms Balderstone said.

The issue of CSG mining and exploration is an emotional one for Seaspray residents.

While she and her husband haven’t been approached by gas companies, beef, lamb and pork farmer Dianna Flint conceded that the threat of unconventional mining felt prevalent.

She said her biggest fear was the threat of water contamination.

She added it was Gippsland’s clean reputation that had opened up niche markets in Melbourne for many Gippsland producers, helping them to stay afloat.

“The minute contamination is a threat that’s it, the area will just be shut down, and that’s a lot of jobs gone,” Mrs Flint said.

“There are more jobs created from agriculture of all types than there are from any gas field.”

Mrs Flint said jobs connected to agriculture were all locally based as farmers continue to spend money in their local towns, she expressed doubts mining companies would shop locally, describing them as “fly in, fly out” operations.

According to Dr Mannix many farmers in the region used bore water for irrigation. He believes there is a real risk underground wells would be contaminated if unconventional mining was permitted.

“If wells get contaminated trucking water in is very difficult and expensive and it would make it very hard to farm down here,” he said.

Dr Mannix said for many farmers the shift to dry farms would reduce the amount of food they could produce by about 80 per cent.

As the decision for Seaspray to go gas field free was not unanimous Ms Balderstone indicated that there would always be some landholders who would regard working with mining companies as a golden opportunity.

She indicated that such divisiveness could tear communities apart.

Greens senate candidate Janet Rice, who attended the rally, said the community needed to reduce reliance on the coal and mining industry not increase it.

“We need to be protecting our farmland and our water supply, they are the things that are the most precious in the future and the coal seam gas industry and other gas mining are just going to put that under pressure,” she said.

“Having the community not only stand up against big companies but with people on the ground who are passionate and saying ‘we don’t want to have this in our town’, they’ll win.

“People have seen what has happened in Queensland and don’t want it repeated here in Gippsland.”