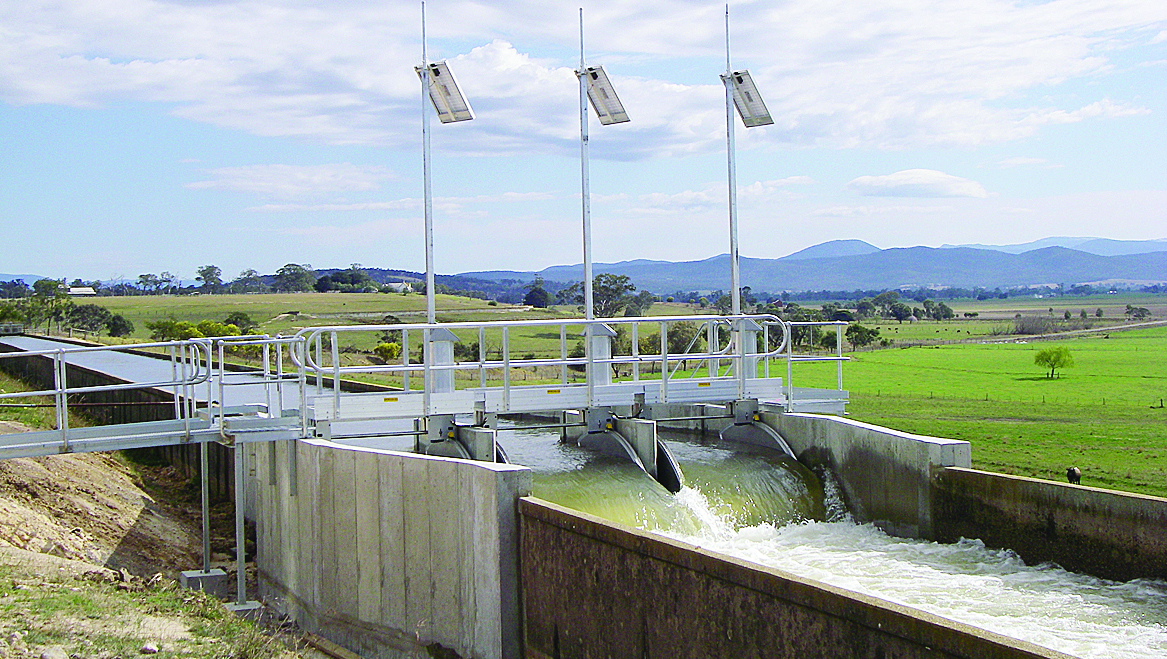 THE modernisation of the Macalister Irrigation District promises a win-win situation: the upgrade will save water, boost agricultural output and return water to the environment.

Crucially, it will also cut pollution going into the Gippsland Lakes.

The know-how comes from Rubicon, a company founded in 1995 by engineers when their employer, the State Rivers and Water Supply Commission, was privatised by the Kennett government.

Rubicon’s technology is also being used in the upgrade of the Shepparton Irrigation District in northern Victoria.

The old, open-channel, gravity-fed irrigation system is notoriously inefficient and water volumes are difficult to measure.

Rubicon’s director of system sales, Tony Oakes, estimated about 30 per cent of water was unused: 10 per cent were spills going out the end to waste, 10 per cent was under-metered due to the old Dethridge measuring equipment and 10 per cent was lost due to seepage, leakage, evaporation and “unauthorised access”.

The flow of water to farms was measured with the Dethridge wheel, invented in 1910 by John Dethridge, then a State Rivers commissioner.

Water bailiffs in Gippsland regulated the flow into the channels and onto farm.

“Anything they got wrong resulted in the farmer not getting enough or too much water, and it would flow out the end to the channel system,” Mr Oakes said.

Rubicon’s solution was to develop new gate products, called FlumeGates, that are installed in series along the channel.

Solar charged, they can overflow like a weir, but a precision motor controls the flow through the gate.

Everything is controlled from Southern Rural Water’s office in Maffra.

Rubicon began the program in 2004 to upgrade the MID, which has 650 kilometres of delivery channels and about 500 kilometres of drainage area, after a feasibility study showed 61 per cent efficiency on the MID’s main northern channel system.

The most recent focus has been on the Nambrok-Denison system.

“We are in the eighth year of repeat work, putting more gates and improving the service,” Mr Oakes said.

“There is less emphasis on replacing farmer outlets more focus is on in-channel infrastructure.”

How does Rubicon’s system work?

The former supply-based operation where the tap is turned on at the top in this case, at Lake Glenmaggie is reversed.

“Essentially, when the farmer has an automated outlet, he places an order on the web, our software evaluates the request in real time ‘Can the control system supply this delivery?’,” Mr Oakes said.

“If ‘yes’, the communications system writes the time to start and stop to the device in the field, and the device in field opens at that time.

“We send the change of flow from that device to the upstream regulating structure, which it reacts to and a cascading chain of events goes up the network, so that we turn on more flow at the dam, and the farmer outlet closing has subsequent reactions the other way, so that the flow is reduced.”

Mr Oakes said having equipment that could change continuously enabled the farmers to get the water closer to when they wanted it rather than the old pre-arranged rigid regime.

“With that system, they had to fit in the flow only when the flow was only changed in the main channel at best once a day or maybe only twice a week,” he said.

Farmers now can order the water at much shorter notice and be told when they are going to get it.

An automated outlet will regulate the flow to be at the constant they ask for, irrespective of the variations in level of the channel.

A motivation for the government investment was that some of the savings were returned to the environment.

“We were able to dry out the outfalls in the channel distribution system,” Mr Oakes said.

“The ends of the channels generally discharge into the drains, which then go to the Gippsland Lakes.

“The drains have run-off from agriculture, such as nitrogen and phosphorus, which go into the lakes, Mr Oakes said.

“The benefit of drying those outfalls has been water quality-related, so they are not moving a lot of those pollutants into the lakes now, and certainly there has been a stronger regulatory framework in terms of retaining dairy waste and wash on farm the whole story there has been improved quite a bit.”

Funding of $32 million for the next three years’ of the MID upgrade was announced in May $16 million from both the state government and the irrigators.