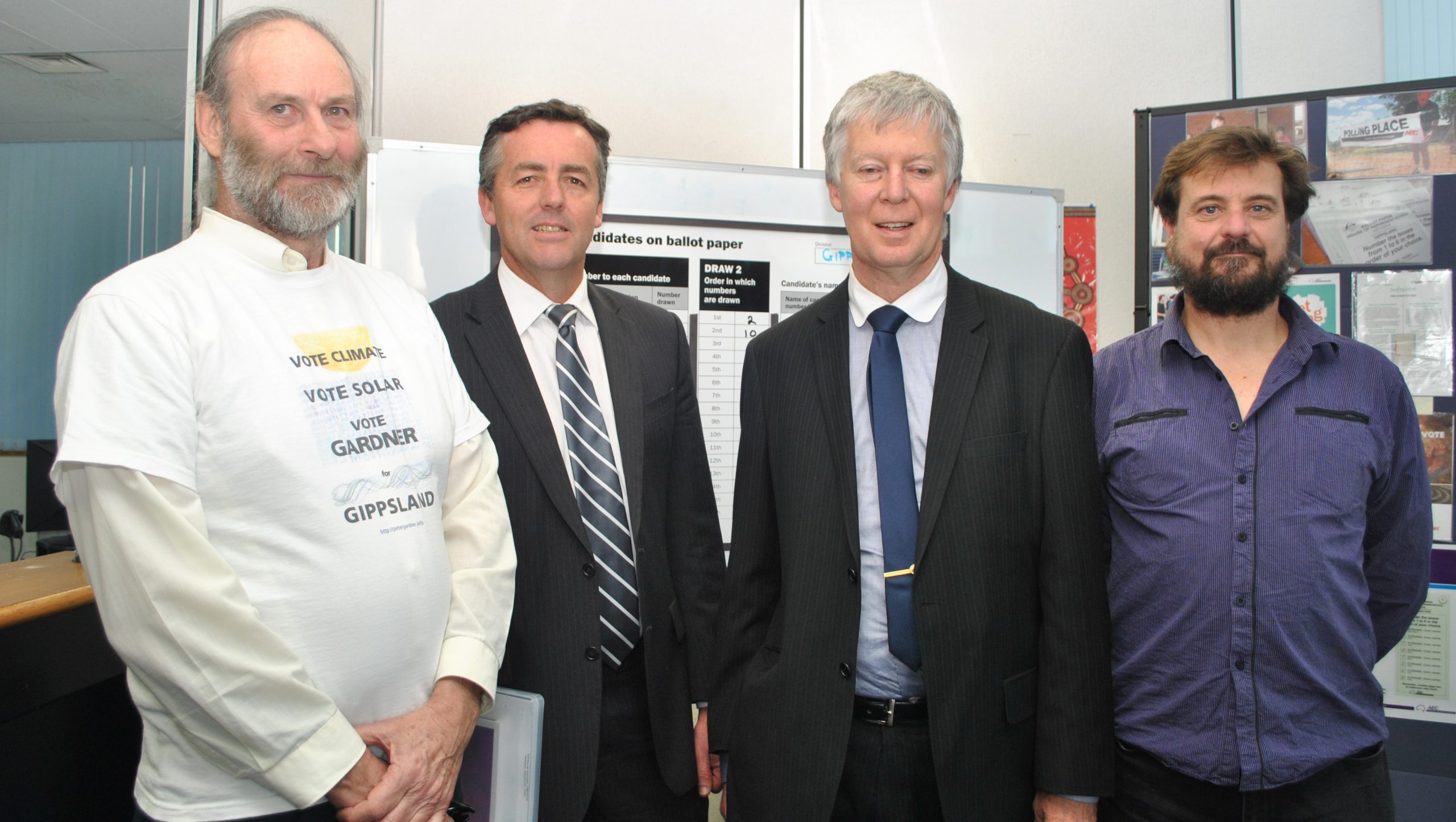 ELEVEN candidates will be contesting the seat of Gippsland at the September 7 federal election, the most since the 2001 poll.

Of the 11 candidates, five don’t live in the electorate, including one who doesn’t even live in Victoria.

Nationals incumbent Gippsland MHR and Lakes Entrance resident Darren Chester will be campaigning to retain the seat he has held since the 2008 by-election.

Mr Chester retained Gippsland at the 2010 election after receiving 53 per cent of primary votes. The Nationals hold the safe seat with a margin of 11.5 per cent.

Another East Gippsland Shire councillor Ben Buckley from Benambra will run for the Liberal Democratic Party. It will the 10th time in 12 polls Mr Buckley has contested Gippsland.

Scott Campbell-Smith from Cabbage Tree Creek will be running for the Greens.

Peter Gardner from Bairnsdale is the only independent candidate. Mr Gardner drew the top spot on the ballot paper when the draw was made on Friday.

Traralgon resident Mark Guerin will be the candidate for the Australian Secular Party, which is campaigning to end religious interference in society.

The socially conservative Rise Up Australia Party will be presented by Peter Dorian, who lives just outside the Gippsland electorate in Moe.

Angie Foster from the Melbourne suburb of Bayswater will be candidate for another socially conservative party, Family First.

Melton resident Sav Magnion will run for the anti-Green, but pro-environment Country Alliance.

Douglas Leitch from Northcote will run for the Australian Sex Party.

Debbie Gravenall will be the Palmer United Party candidate. A resident of the Gold Coast, Ms Gravenall replaced boxing champion Will Tomlinson, who is relocating to the United States, as the candidate for the party of mining magnate Clive Palmer.

Mr Chester said drawing fourth position on the ballot paper, one place below Mr McNeill would not have any impact on the election outcome.

“Gippslanders have a choice at this election about who they trust to deliver strong economic management, jobs growth, border protection and national prosperity after six years of the Rudd-Gillard governments,” he said.

“We need to get our nation back on track and restore business confidence by providing stability, certainty and a balanced budget.

“It’s been an honour and a privilege to represent Gippsland in federal parliament and I’m happy to stand on my track record of always fighting for the needs of our community.

“Regional areas make an enormous contribution to the wealth of our nation and we need to receive a fairer share of government funding for roads, public transport, health, education, childcare, aged care and the disability sector.

“If elected, my first priority is to continue to protect the jobs we have in our traditional industries and support the creation of new opportunities for Gippslanders.”

“It’ll address the positive nature of a Labor government and demonstrate that they are prepared to work for Gippsland. But they’ve got to be voted for in parliament, I’m not sure that Darren Chester has the ability to vote against his boss Tony Abbott.”

Mr McNeill said Labor announcements such as the trade training centres for Gippsland were budgeted, highlighting how the Liberal-National coalition would have to cover a $70 billion black hole to cover its promises.

“He’s going to have to strip something out to bring himself back,” Mr McNeill said.

Mr McNeill described having four candidates living outside the region as “a bit of giggle”.

“Frankly, it’s between the locals,” he said.

Mr Campbell-Smith said the appeal of the Greens was increasing for Gippsland voters.

“I’m really excited and pleased to be standing for the Greens at this point because we have such a strong rural and agriculture platform. That platform is reaching out, I hope, to rural and agricultural residents and voters,” Mr Campbell-Smith said.

“I think there is actually a lot of commonality in the agendas of rural people and the Greens. I often remark rather a lot of the environment is in fact in the country.”

The Labor, Liberal and National parties, Mr Campbell-Smith said, had “shuffled so far to the right” that the Greens have found a greater space on the political landscape.

“There are a lot people with values which are not monetary who find themselves increasingly in agreement with the Greens. It’s reflected in our gradual growing vote,” he said.

Mr Gardner said his campaign would be focused on climate change.

“Climate change is the elephant in the room,” he said.

“Neither of the major parties are mentioning it, it’s something that’s slowly creeping up on us.

“Solar is the other part of my campaign. Bring on the solar revolution basically.”

Mr Gardner said he won’t be directing voters to preference particular candidates, rather asking for their first vote as a way to send a message to the major parties about their thoughts on climate change.